Source: Relief as doctors trickle back to work | Newsday (News) 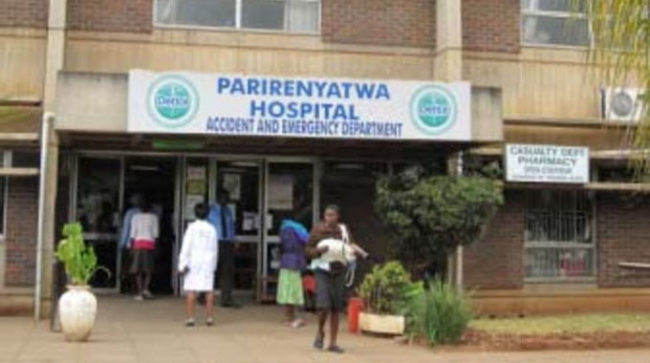 A MAN lies on a stretcher, visibly in pain but at ease while three other people sit on wheelchairs, with over a dozen more sitting on benches — chatting and waiting.

If one had been here just a week ago, however, it could not have been the same place. The contrast was that sharp.

This is Parirenyatwa Group of Hospitals’ casualty section, which, since the fateful day in September when doctors threw away their white dust costs and stethoscopes, has been deathly quiet, with no activity whatsoever. In fact, the place was as silent as a tomb, deserted.

Patients had lost hope, paying a huge price for the vicious fight between the doctors and government over salaries and working conditions, which the doctors said had become untenable.

Prior to the industrial action, the country’s biggest referral centre had been a hive of activity, with people coming from all over the country to seek medical attention.

But the tide changed course when the doctors embarked on a strike which is yet to be called off.

For Grace Dzvene, the past three months have been quite uncomfortable for her family as they have had to watch their father in pain because of a wound he suffered during the liberation struggle.

They had no option but to stay at home in Chiendambuya, some 178km east of Harare as they dreaded wasting bus fare travelling to and from the hospital without getting any service.

“We are supposed to come once every month for check up with my father but had stopped because of the strike. It is quite expensive to travel so we put it on hold though we had no other option, a round trip to Harare and back home requires over $400 now,” she said.

She, however, expressed relief after they were finally attended to by the doctors currently on call.

Many in-patients told NewsDay Weekender that they were receiving quality service, with the doctors never missing their daily rounds in groups of eight or more.

“I am happy that the doctors have returned to work. God knows what could have happened to me had they not returned.
I always look forward to mornings when doctors come to assess me, and I am very happy with the progress I have made so far,” said Richmond Mabheki, who is admitted at one of the central hospitals.

The situation at Harare Central Hospital is still a bit relaxed as things have not yet returned to normalcy, with reports of only a few doctors having returned to work.

A member of staff, who spoke on condition of anonymity, said doctors were still returning although the number was still minimal while new faces were deployed earlier this week.

“There is a small number of doctors reporting for duty although on Monday, new faces came on board. Some wards are still closed as only emergency cases are being admitted,” the source said.

Harare Central Hospital is usually busy, with referrals from around the country, but since the doctors downed tools last year, it has been peculiarly quiet.

The prolonged absence by doctors had many casualties, with many patients reported to have died due to illnesses that could have been treated had they received medical attention while others had their health conditions deteriorate from lack of proper care.

The move by doctors was termed heartless in contrast to their calling and the Hippocratic Oath.

Until mid-December, the doctors stuck to their demands, not moved by any threats, legal or otherwise.

The unity was, however, broken days before the Unity Day when a splinter group, Progressive Doctors’ Association of Zimbabwe (PDAZ), was launched and it quickly countered ZHDA’s attempts to prolong the strike until government acceded to their demands.

To date, members of the splinter group are trickling back to work while their rivals in the ZHDA are getting threatened with executive members being pushed to resign from their roles in the association.

On Sunday, ZHDA president, Peter Magombeyi, who led the doctors at the beginning of the lengthy strike resigned, citing personal reasons raising speculation of forced withdrawals..

PDAZ spokesperson, Anesu Rangwani, said 450 doctors from their group had returned to work.

Meanwhile, the majority of the ZHDA membership is going from one hearing to the other and is not yet back at work.

According to sources from both Harare Central and Parirenyatwa hospitals, some of the doctors manning the medical centres were seconded from the Zimbabwe National Army personnel deployed to work during the strike.

The post Relief as doctors trickle back to work appeared first on NewsDay Zimbabwe.