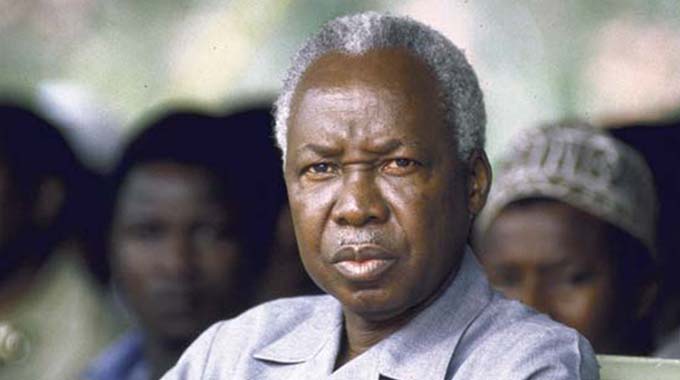 It is 20 years since that gloomy Thursday when news of the passing on of one of the symbols of the fight for political freedom in Africa filtered through.

Mwalimu Julius Kambarage Nyerere was the father of southern African liberation, and one of the founding fathers of the Southern African Development Community (SADC).

Born in Butiama near Lake Victoria on 13 April 1922, when he passed away on October 14, 1999, Africans everywhere shared the sense of loss felt by Tanzanians. He was Baba wa Taifa, Father of the Nation, the moving force for the independence of Tanganyika on December 9, 1961 and for its unity with Zanzibar on April 26, 1964 to create the United Republic of Tanzania.

Nyerere was a founding father of the Organisation of African Unity (OAU), now the African Union (AU), and he hosted the OAU Liberation Committee in the safety of Tanzania to support the remaining decolonisation of the continent, notably supporting those countries that had to take up weapons of liberation.

His dedication and commitment to the liberation of southern Africa, to African unity and to pan-Africanism remains unsurpassed.

True to his vision, it can be said that he “carried the torch that liberated Africa”.

When the other countries of southern Africa were forced into wars of liberation to eventually achieve the same end, Tanzania provided political, material and moral support until independence. This support led to the attainment of majority rule for Mozambique and Angola in 1975, in 1980 for Zimbabwe, 1990 for Namibia and finally 1994 for South Africa.

Nyerere pursued the ideals of liberation, democracy and common humanity into the rest of the continent and, with the leaders of the other few African countries that were independent in 1963, established the OAU.

The main objective was political liberation for the rest of the continent. Their tool for achieving this, the OAU Liberation Committee, was hosted by Tanzania, and most liberation movements were based there at one time or another. The political changes in Namibia and South Africa in 1990 and 1994 changed the face and future of the African continent and completed the work of the OAU Liberation Committee, but socio-economic development has remained a vision.

The leaders of Tanzania, Zambia and Botswana formed the Front Line States in 1974 to work together in a united front for common security and for majority rule in neighbouring countries, under the chairmanship of Nyerere, and this was a forerunner of the SADC Organ on Politics, Defence and Security Cooperation.

Mwalimu Nyerere chaired the Front Line States from inception in 1974 until he retired from office in 1985.

Nyerere was one of the nine leaders who came together in 1980 to establish the Southern Africa Development Coordination Conference (SADCC), which later became SADC.

He initiated the early days of China-Africa relations with Premier Zhou Enlai in the 1960s when both China and Tanzania were still fresh from liberation themselves. The two leaders formed a bond that saw them visit each other on several occasions between 1965-1968, sharing a vision of what China and Africa could become, in addressing their economic development after political independence.

They laid the plans for the Tanzania-Zambia Railway (TAZARA), the freedom railway that liberated Zambia from dependence on apartheid South Africa and Southern Rhodesia for its trade routes, to send its valuable copper to market through the port of Dar es Salaam.

Mwalimu described the TAZARA as a “weapon of freedom”.

A charismatic leader of sharp intellect and great personal integrity, he welded a country and a national identity from over 120 ethnic groups, united by their language Swahili and by a social harmony constructed on the ideals of peace, justice, unity and personal commitment.

His firm support for equality and tolerance ranged across all diversity of race, religion, class and gender. He encouraged Tanzanian women to play a leadership role in society and adopted a parliamentary system that has guaranteed seats for women.

Nyerere retired as President of Tanzania in 1985 and as chairman of the party Chama Cha Mapinduzi in 1990.

After leaving office, Nyerere devoted his vision to mechanisms to strengthen developmental links among developing countries of the South.

He chaired the South Commission from 1987 to 1990, dedicating the next decade to its service, and was founding patron of the Southern African Research and Documentation Centre (SARDC), based in Harare, Zimbabwe.

He was honoured for his contribution towards the liberation of southern Africa and SADC regional integration through a public lecture held on the sidelines of the 39th SADC Summit held in Tanzania in August.

The lecture, which was organised by the SADC Secretariat in collaboration with the Tanzanian Ministry of Foreign Affairs and East African Cooperation and the Uongozi Institute, and was delivered by former Tanzanian President Benjamin Mkapa.  — sardc.net