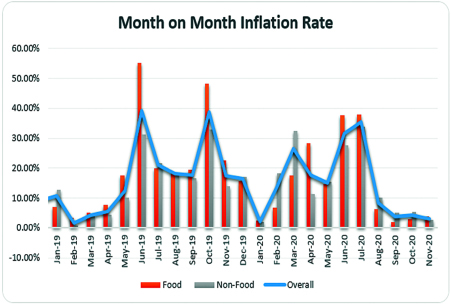 November saw a marked increase in the level of money supply and this could explain the upsurge in the performance of the stock market, as well as the uptick in the parallel market exchange rate.

Reserve Bank of Zimbabwe (RBZ) Governor Dr John Mangudya is, however, not worried as the growth of reserve money is still below the targeted 25 percent quarterly growth.

Reserve money, which had averaged below $13 billion for the better part of the year from April till October, averaged $18 billion in November and was slightly below that in the first week of December.

According to statistics provided by the central bank, reserve money at the end of October stood at $15,5 billion and finished November sitting at $17,9 billion.

For the first week of December, it had slightly declined to $17,7 billion.

Major shifts in money supply were in banking sector deposits at the RBZ, which increased from $13,4 billion at the end of October to $15,5 billion by end of November.

The increase in reserve money has, however, coincided with strong gains recorded on the Zimbabwe Stock Exchange (ZSE) as well as the marginal depreciation of the local currency. In November, the ZSE’s market capitalisation gained 7,5 percent, with more than $4,1 billion being invested. The amount is the second highest turnover this year.

The highest of $4,6 billion was recorded in June, leading to the suspension of the ZSE amid allegations that the market was now a haven of currency manipulators. Post November, the stock market has since broken its June valuation record of $228 billion and is now above $247 billion as of Tuesday.

Market watchers say this is a result of increased liquidity in the market.

The exchange rate has been weakening.

The RBZ said the rise in reserve money was largely due to an increase in Government expenditures associated with payment of annual bonuses, in addition to Government’s monthly salary and wage bill.

“This saw Government deposits at the Reserve Bank falling by $2,3 billion during the week under review, thus injecting liquidity into the market,” reads the central bank’s statement accompanying its November 20 money supply update.

This has been supported by fiscal tools such as limiting Government spending.

The result has been relative exchange rate stability since June and a slowdown in inflation.  Since the increase in reserve money is a result of budgeted spending by Government, it is not expected to destabilise the market. Year-on-year inflation, which reached a peak of 837 percent in June, has since slowed to 401,66 percent as of November. The month-on-month inflation rate in November 2020 was 3,15 percent, shedding 1,22 percentage points on the October 2020 rate of 4,37 percent. — Ebusinessweekly.