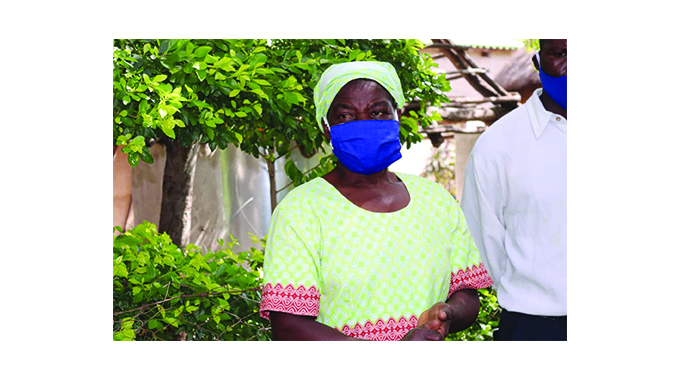 Vincent Gono, Features Editor
FOR the better part of her marriage to her husband Benson Moyo of Jekero village, Ward 4 in Chiredzi district, Mavis Baya (55) had not known peace.

She had given him four boys in the subsistence of their marriage who are all above majority age but that didn’t look enough for Moyo to respect his wife. They are an elderly couple by all standards. They are fit to be nursing grandchildren.

He would allegedly beat her up and sometimes shamelessly drag her out of the house and the home for asking for money to go to the grinding mill or for buying as little things as salt in the home. He simply didn’t want to be bothered. He would say he doesn’t have the money.

“I would receive insults first. Deep painful insults. And if I keep quiet I would be beaten for that. If I respond no matter how calm, I would still be beaten. I was treated like an unwanted stepchild. It was like when hands were washed, water was wasted and when they were not washed they were dirty and disqualified me from eating. It was a beating either side. And my crime was asking for money to either buy salt or go to the grinding mill,” said the elderly Baya.

The solution, she said, was to sell the indigenous chickens that she had each time there was a shortage of mealie-meal or other small groceries. The small garden that she had was not producing any surplus for trading. She had little knowledge of how to do gardening. The little she knew was all too basic. And besides, part of Chiredzi is arid, the water table is too low and agriculture activities are difficult to sustain through rain water for the rest of the year.

Her story is one that easily draws tears of pity but she is not alone in the domestic violence predicament. Rose Farai of Guluji, village 4 in Ward 22 in the same Chiredzi district tells a similar story about her husband who allegedly didn’t want her to start self-help projects. She was not allowed to have a bank card or a cell phone. When she gets some money, all of it was supposed to be declared to the husband and the source made known.

Her husband was abusive and they had nothing of substance to their name. They were poor. Her husband would bring very little from his tolls in Chiredzi town. She also said fights were not anything unique to them.

“There were days when my bags were always packed. I was always ready to leave and aunties from both sides were always busy trying to calm down the situation. Tempers would flare. He would not allow me to join clubs, let alone do projects and yet he was evidently struggling to sustain the family and would often hide his failure through violence,” she said.

The women said Gender Based Violence (GBV) directed at them by their spouses changed after the introduction of the Zimbabwe Resilience Building Fund (ZRBF) for Enhancing Community Resilience and Sustainability (ECRAS).

With the coming of ZRBF – ECRAS whose projects is biased towards women where they constitute 52 percent of beneficiaries, cases of GBV in the homes have drastically gone down. Baya who started her chicken project with only four chicken and now has over 300 indigenous chickens says she is now self-reliant and that has brought a great deal of peace and harmony in her home.

“The coming in of ZRBF – ECRAS has transformed so many lives in the Chiredzi community. I have known peace in my marriage. My husband has started appreciating me. He is even there to assist me. He no longer beats me.

“Much of our time and energies are channeled towards the garden, the fish ponds where there is tilapia fish and checking on our projects courtesy of ZRBF. We have even constructed this big house using part of the proceeds from the projects.

“I am now a caterer at the shops. I am cooking sadza and chicken for sale from my poultry project. I no longer receive insults and the bashing has since stopped because I no longer ask for money like I used to do. I am now even giving him something as pocket money from my savings,” she said with expressions of joy written all over her face.

Rose Farai is also glowing and excited. She has a catalogue of success stories to tell, from fisheries, Boer goats to small grains.

“We are now working together with my husband and through these projects we have managed to acquire this truck.

We are now eating a four-star diet and no longer think of going to town to look for something to do. ZRBF – ECRAS has taught us to village savings and lending schemes and they are going a long way in seeing us achieve all that we want. As far as domestic violence and gender based violence that used to be directed to the women folk, a number of women are testifying that they are now leaving in perfect harmony with their spouses,” she said.

Agritex district supervisor Sibusisiwe Tshuma told Sunday News that the projects were aimed not only at empowering women in the district but to promote gender equality through gender dialogues, gender champions as well as challenging harmful gender inequalities.

“It is through that objective of ZRBF – ECRAS that the lives of women in the district have changed ever since they were introduced to the projects. The projects teach both women and men to be able to sustain themselves. The aim of these projects is to break the cycle of poverty and food insecurity. All the stories of violence that you heard are a result of insecurity. A hungry stomach knows no principle and the projects have cushioned the communities against complex interconnected shocks and stresses that undermine their ability to care for and invest in their families,” she said.

The Zimbabwe Resilience Building Fund is a long term development initiative supported by the Ministry of Lands, Agriculture, Fisheries, Water and Rural Resettlement. It was funded to the tune of US$100 million by the EU, Embassy of Sweden, UNDP and the Foreign Commonwealth and Development Office (FCDO).