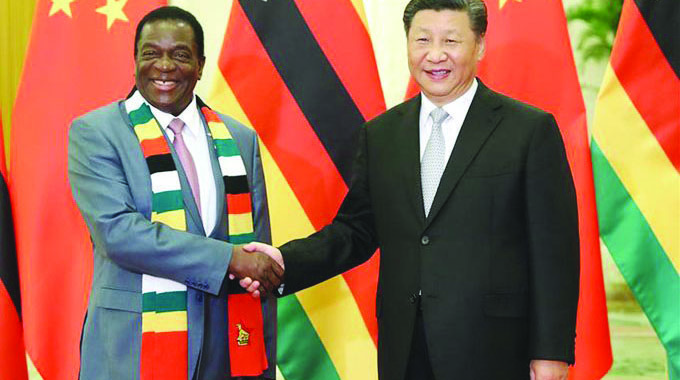 Since the inception of the liberation struggle in Rhodesia, the relationship between Zimbabwe and China was forged to higher extremes.

It is critical to note that relations African countries and most Western nations are always viewed within the prism of residual colonial ambiguities and the latter’s perennial quest of preserving their self-interests through exploitation of resources.

Zimbabwe realised an emergence of hostility between herself and most of the Western countries following the land reform programme with the main albatross being the economic sanctions imposed on the country by the United States and the European Union (EU).

This aspect engineered to significant degree the strengthening of cordial relations between Zimbabwe and China.

As a way of strengthening the aforementioned, the fifth plenum of the Chinese Communist Party’s 19th National Congress, which concluded on 30 October 2020, laid out the guidelines for China’s 14th five-year plan, running from 2021 up to 2025.

It signalled a major strategic shift in China’s approach to economic and social development.

The plan highlighted four areas of change that are particularly significant and these are; autonomous technologies; a new way of urbanization; equal provision of public goods; and greener production. These areas are set to define China’s economic future in the next 10 to 15 years. In this regard, Zimbabwe is a key player based on the beneficence aspect.

Key to note is that “dual circulation” is proposed as one of the key elements of China’s new development framework.

This was upon the realisation that for over 30 years China embraced the global economy and international circulation entailing international trade, investment and human exchanges. The factors have played a central role in China’s remarkable economic and industrial growth.

However, the current focus is inclusive of domestic circulation, which entails focusing on building domestic markets being emphasised as a response to the changing international environment.

China’s 14th five-year plan was unveiled at the backdrop of concerted efforts by China’s economic rivalry in particular the US to contain the continued economic growth and competitiveness on the global stage.

Measures that have been taken by the US include de-coupling from China on the technological front and advancing a global anti-Chinese technology campaign, with a view to obstruct and even stop China’s technological advancement. This included the ban on US export of high-tech components, including high-precision chips, to more than 200 Chinese companies and universities. Specifically targeted Chinese technological innovators include Huawei, famous for its 5G network technology.

In support of engagement and re-engagement strategy, Zimbabwe and China have signed numerous deals.

One of the deals is that of a grant from China for the construction of a new Parliament Building, which is currently underway. There is also the issue of refurbishment of Hwange Colliery. More so, there is an issue of the expansion of the Robert Gabriel Mugabe International Airport.

This is justification of the massive and high degree of diplomatic and economic relations to realise meaningful economic cooperation with China in pursuit of China’s five-year plan. It is against this background that, building autonomous technologies in key areas, including the chips industry, has become the top priority of China’s domestic circulation approach.

The result would be that China will likely incur higher costs in producing domestically, but US chip companies will also lose a large market and their innovation capacity will be seriously hampered.

Meanwhile, the election of Mr Joe Biden as the next US president raises hopes that the US government will change its antagonistic policy towards China.

While technological competition between the two countries will not disappear, the Biden administration will likely focus more on raising the US up rather than holding China back.

As part of the 14th five-year plan, China plans to increase its urbanisation rate to 75–80 percent over the next 15 years.

This is in cognisance of the fact that China’s urbanisation has lagged behind its pace of economic development, with about 60 per cent of residents living in the cities.

The new strategy will greatly change the geographic distribution of China’s population and economic activities.

Another key focus area under the 14th five-year plan is on increasing the provision of public goods in the countryside. China aims to become a fully modernised country by 2035.

Universal coverage of social security is a key feature of modernised countries, however, with a deep urban–rural divide, universal coverage based on a single scheme will be a remote target for China even by 2035.

Experts contend that to address this phenomenon, in a more pragmatic way, China should develop a ‘unified but multilayer’ system that offers a menu of schemes that vary by premiums and corresponding benefits. A closer analysis of China’s 14th five-year plan shows that its implementation can potentially make technological autonomy one of Beijing’s top priorities. It also signals a shift from pure economic growth to social and climate-friendly development interventions.

In addition, the new urbanisation strategy, more equal distribution of public goods and increased investment in environmental technologies will provide new sources for sustainable growth, either by increasing domestic demand or by improving China’s economic efficiency.

Tichaona Maume is a student at the University of Zimbabwe doing an MSc in International Trade and Diplomacy degree programme.