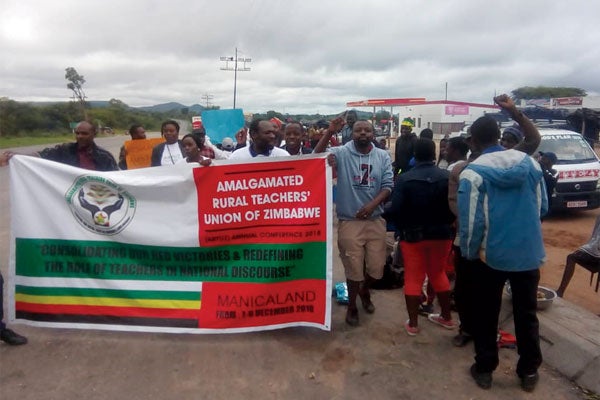 Following a brutal crackdown on MDC demonstrations by the police in Harare last Friday, the Amalgamated Rural Teachers Union of Zimbabwe (ARTUZ) yesterday announced that it had postponed plans to picket at Finance minister Mthuli Ncube’s offices to pressure government to review the educators’ salaries.

A fortnight ago, the rural teachers resolved to start picketing at Ncube’s offices on pay days to push for interbank rate-pegged salaries. Dubbed Pay Day Funerals. The protests were scheduled to begin yesterday with teachers urged to wear black as a sign of mourning their poor salaries and the death of the purchasing power of their incomes. ARTUZ president, Obert Masaraure told NewsDay that they had set a new date for the protests.

“Due to the current instability in the capital, the proposed salary funeral (demonstration) at Mthuli Ncube’s offices has been shifted from August 19 (yesterday) to Friday August 23,” he said.

Masaraure reiterated that the postponement was a strategic decision taken by the rural teachers after last week’s ruthless crackdown on MDC protesters by riot police.

“It (postponement) was a strategic decision to remobilise and rebuild the momentum that has been destroyed by the cowardly violence perpetrated by the State against innocent citizens last Friday,” he said.

Last year when ARTUZ camped at the Finance ministry’s offices making similar demands, the police rounded up the union’s leaders and locked them up. However, Masaraure indicated there is no fear among teachers due to the previous actions by the police. “Out of courtesy we notified the police and they guaranteed the safety of all protesters. At law we are exempted by the Public Order and Security Act in such a protest because it is an internal event. It will be ridiculous to find the police meddling in a labour dispute between an employer and employees,” the ARTUZ president said.

Last month, government gave a once-off $400 cushion allowance to all civil servants and expectations were that the amount would automatically be effected on this month’s salaries. However, the civil servants did not get the allowance, effectively pushing them deeper into poverty as the local currency continues to tumble against the United States dollar.

Masaraure said currently teachers were earning the equivalent of US$30.