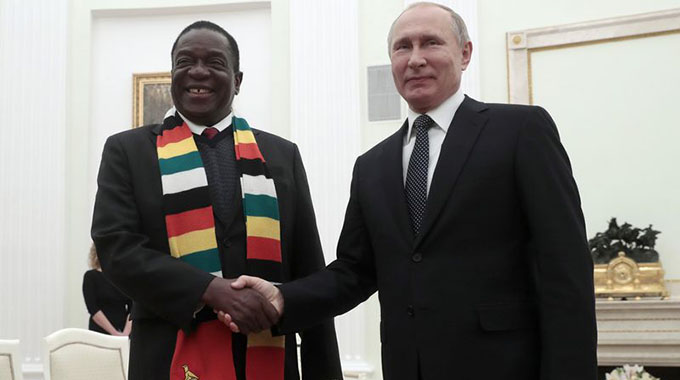 The Russia-Africa Summit to be held next week will help cement strong ties between Zimbabwe and Russia and is a step in the right direction in aiding the African country’s economic turnaround strategy, an official has said.

In an interview with The Herald on the summit which President Mnangagwa is expected attended, Russian Ambassador Nikolai V. Krasilniko said cooperation between Harare and Moscow will help the Second Republic attain the targeted middle income economy by 2030.

“The Republic of Zimbabwe under the new dispensation will maintain its high profile role in building a better, more just and equitable system of international relations based on principles of respect for sovereignty, non-interference in internal affairs of States, promoting national identity and civilisation diversity,” he said.

“At the same time Harare, together with fellow African capitals will benefit from the robust engagement with Moscow in many spheres including trade, investment, scientific, military-technical, humanitarian cooperation in order to transform Zimbabwe into upper middle-income economy by 2030, as well as to achieve goals set by the AU Agenda 2063 and the UN 2030 Agenda for Sustainable Development.”

Ambassador Krasilniko said Russia will work with Zimbabwe in areas of energy, transport, communication and many others.

“The Russian side is ready not just to invest money, but to offer scientific and technological achievements to African partners, share with them the experience of upgrading energy, transport and communication infrastructures,” he said.

President Mnangagwa and his Russian counterpart President Vladimir Putin are expected to sign these major deals during the summit.

“It has been decided to prepare for signing Intergovernmental Agreement on mutual protection of classified information, Intergovernmental MoUs on cooperation in the platinum group of metals, MoUs between Russian and Zimbabwean Ministries on environmental protection and natural resources, geological exploration and mineral resources management, on cooperation in the peaceful use of nuclear energy,” said Mr Krasilniko.

“These are the deals of various nature set to consolidate the legal framework of the bilateral relations. The more solid such a basis the more enhanced mutually protected and efficient is the economic partnership.

“It was agreed to undertake joint efforts to facilitate preparing the deals for signing. And you know, when working on documents like these, the most important thing is to be sure that you get an implementable agreement that will serve you as a practical guideline.”

Harare and Moscow enjoy cordial relations dating back to the liberation struggle.

It will take place from 23 to 24 October in Sochi at the Sirius Park of Science and Art.

Read the full exclusive interview with Ambassador Kransilniko in The Herald on Saturday.