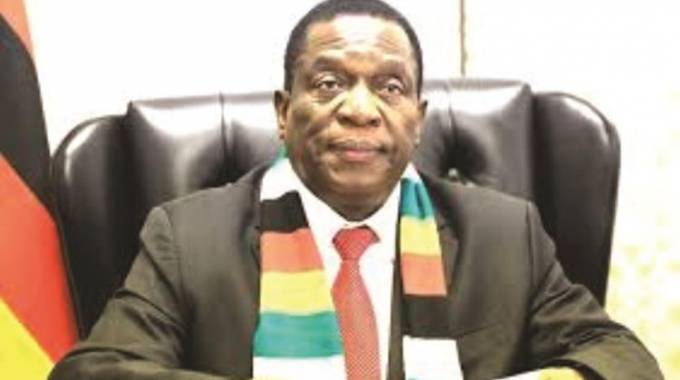 PRESIDENT MNANGAGWA . . . “We would want to benefit from the science and technology which the Russiana Federation has developed in terms of agriculture, agro-processing, but of course also in the defence and security we have cooperation.”

Interview Julia Chapman
President Emmerson Mnangagwa (ED) was this week in Russia where he attended the Russia-Africa Summit that ended on Thursday. On Wednesday night, Julia Chapman (JC) of Feature Stories News in Moscow had an interview with the President on various isues relating to Zimbabwe-Russia relations.

Below is the full transcript:

JC: Generally, how do you consider the relations to be between Russia and Zimbabwe right now?
ED: The relations that exist between the Russian Federation and Zimbabwe are historical. During our period of fighting against colonialism, we were supported by the then USSR which is now the Russian Federation in terms of training our military personnel, as well as supporting with military hardware. So the cooperation is not begining now; it has been there before. Currently, the focus is now on economic and trade cooperation because we are now independent.

JC: What are the main areas of cooperation between the two countries?
ED: We would want to benefit from the science and technology which the Russiana Federation has developed in terms of agriculture, agro-processing, but of course also in the defence and security we have cooperation. But, principally, the economic needs which Zimbabwe needs as a result of sanctions. And of course I know the Russian Federation is also under sanctions, but they have more capacity than ourselves to continue to assist us in developing trade between the two countries.

It’s not because they are under sanctions, it’s an issue of established relations that are there. We are only deepening and consolidating relations that have existed before and the current crop of leadership here, as well as Zimbabwe, are determined to solidify the relations that we have inherited from the former leaders.

JC: There is a huge attendance of African leaders today. What made you and the other leaders want to make this trip to Sochi, why do you think so many have come here?
ED: Africa as a continent is focusing now on economic development, is focusing now on continental trade and I think if you remember we signed the Africa Continental Free Trade Area (AfCTA)which puts Africa as a market together, so that we now feel it is now necessary as a bloc to relate with other bigger economies like Russia and China, India, American economy and Japanese economy. So, as a bloc, we think it’s necessary that we stand together. Our voice will be heard if we are together than when we are separated.

JC: There are certain countries that have invested more money in Africa than Russia does. Russia’s trade with Africa is relatively small. What can Russia really offer?
ED: I believe that it is small because Russia has been having, after the break of the USSR, internal consolidation, and now I think they have reached a stage where they must look out and this is what is happening. This is why Africa is responding and we know Russia has never been a power that colonised Africa. We feel very free to trade and have cooperation than other Western countries that colonised us before.

Investment has been there now for three years or so, it continues to develop. The lead time is about three to four years for us to begin actual production when there is no issue. We feel we are on track.

JC: Why is Zimbabwe an attractive economic partner for Russia, given the economic instability in the country? Should Russia not be wary of investing there?
ED: Because of the sanctions we are facing, I think Russia would be more interested in assisting us knowing that we have historical relations. Russia assisted us to have our independence. I don’t think they would be interested to see us being crippled by these illegal sanctions which have been imposed on us by the Western countries.

JC: Do you believe Russia should not be expecting something from Africa or try to play an oversight role on the continent?
ED: Obviously, President Putin is the boss of the Russian Federation. I don’t think he would be telling lies to Africa. We believe in what he said to us that the relations he is promoting with Africa have no strings at all. And, in fact, this is also evidenced by the past relations which we had with Russia. No strings at all; it’s actually mutual trade, mutual relationship, mutual cooperation.

JC: Given there are serious economic problems in Zimbabwe, many people have been struggling with food and water shortages. When do you think people of Zimbabwe will see some of the benefits from economic cooperation with Russia?
ED: We should understand that when there is drought and climate change. I think you are aware that early this year, we had the Cyclone Idai which devastated Zimbabwe, Mozambique and Malawi, that had a serious impact on our economy, compounded by a severe drought that hit us. So, even our Kariba Dam which used to give us something like 950 megawatts, the water is so low that we are now able to produce 100 megawatts. So, we believe that now we are on the onset of the summer season and we believe that in terms of what we hear from our Meteorological Department that we are going to have better rains this year, we believe things will improve.

JC: Do you think Russia investment will improve the economic situation?
ED: Russia has already two or three major investments in the country in the mining sector in platinum, as well as in diamonds. They are also coming into agriculture, so we believe that adding to other investments that has come into the country will improve our economy.