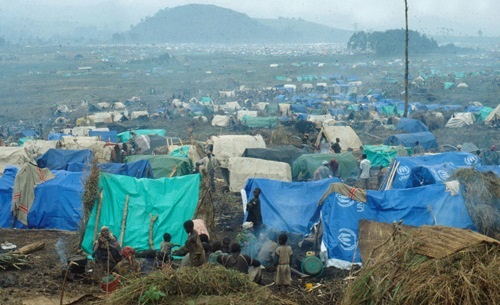 HARARE – “One afternoon all hell broke loose when the rebels started raping women and killing men in our village.

“Afraid of being the next victims of the impromptu war, we left Rwanda in the evening and never looked back. I had just witnessed the killing of my aunt by our neighbour because we were not of the same ethnic tribe.

“While in transit, we communicated with some friends who told us that Zimbabwe was the best destination as it took good care of refugees,” Claire Chilonga told the Daily News, recalling the darkest chapter in Rwanda’s history, when Hutu extremists killed 800 000 minority Tutsis and moderate Hutus between April and July 1994. Most were hacked to death with machetes.

This came after Hutu extremists shot down a plane carrying former president Juvenal Habyarimana, whose assassination marked the start of the 100-day genocide in 1994.

Chilonga was one of the few women who trekked the bush from Rwanda and made it to Zimbabwe seeking safety.

She claims to have walked from Rwanda to the border with Zambia and hitched a ride to Zimbabwe, where she was later taken to the transit camp in Harare before proceeding to Tongogara Refugee Camp in Chipinge.

The Waterfalls Transit Centre (WTC) is located at Plot B of Woodlands, Cheviot Road in Waterfalls, Harare is a referral centre with the mandate of providing shelter and protection to referral cases that include medical, protection and resettlement cases.

Chilonga said her family members followed her and arrived in Zimbabwe on different dates in 1994 when the genocide broke out.

The United Nations Refugee Agency has been negotiating with Rwanda to begin flying home the most vulnerable refugees in the country, including families headed by women, unaccompanied minors and those too frail to walk.

Government has attempted to repatriate over 500 Rwandan refugees before to their country but many say they would rather flee TRC if government fails to address their plea for local integration.

United Nations had given a December 31, 2017 deadline for  the cessation of refugees, a clause which is affecting all Rwandan refugees who fled the country before 1998.

Following the 1994 Hutu-led genocide, the-then Hutu government was toppled from power leading to many Hutus fleeing the country fearing retaliation from the Tutsi-led government.

The lapsed cessation deadline is an extension of a 2013 deadline that flopped after the refugees resisted repatriation in spite of assurances by the United Nations High Commissioner for Refugees (UNHCR) which has been organising “go-and-see first” visits for a select few with the hope that they would return with encouraging experiences.

But many fear persecutions if they returned to Rwanda.

“What I fear most about going back home is that whenever I call some friends who were courageous enough to return, they tell me the same man who killed my aunt still lives next to my house,” Chilonga said.

“How safe can I feel knowing that a murderer I saw with my own eyes lives freely next to my house? I will only return when he either dies or is imprisoned,” she said.
UNHCR field officer Daniel Banda said Zimbabwe has nearly 20 000 refugees.

Banda said about 7 000 are at the transit camp in Harare and around the borders, while 13 071 have reached TRC.

He said while many other people argue that the refugee situation in Zimbabwe is generally low, more still needs to be done.

“It is more than just providing shelter and a safe place for these people but also a dignified way of life that will make them feel comfortable.

“The government has so far proven that their open-door policy on refugees is welcoming to these persons of concern. Acceptance into a foreign country and incorporating them is more beneficial than money, food or other hand-outs,” he said.

He, however, said with projects that were started at the camp by various organisations, the thrust is eventually to stop the cash handouts.

“We want to instil a sense of self-reliance in the refugees so that they are not only dependent on handouts from donors. They are rearing pigs, chickens and rabbits and also have other income-generating projects that they can use,” Balzer said.

Terres des Hommes programme coordinator Wilfred Mapiko said one of the successful projects that the refugees have embarked on was soap making.

He said they make the product on-site and sell it to the host community and surrounding areas.

“Because they could not sell it beyond their jurisdiction, they had to form a company which is now fully registered.

They source some of their raw materials like animal fat from Harare and other farms close by. Now they can sell their soap to retail and wholesale stores and use the profits to grow their business.

“The proceeds are share equally among those in the camp. These people have the potential to go beyond hand-outs if given the opportunity,” Mapiko said.

Tuckshop owner Gladys Mulambisa, originally from the Democratic Republic of Congo, whose shop was stocked better than most retail supermarkets in Harare, said her products come from nearby Chipinge.

Mulambisa, who has been operating the business for over three years, said the economic hardships in Zimbabwe were now affecting her operations.

“While we did not really experience any shortages here, the prices of our products where we source them and risen by at least 50 percent and also had to do the same thing.

“We now have to charge in bond and United States dollars to stay afloat and be able to provide for our customers,” she said.