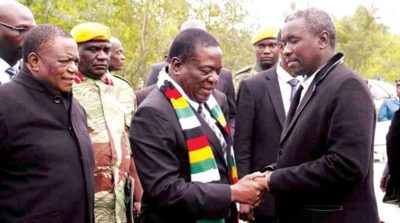 President Emmerson Mnangagwa’s ally, Kudakwashe Tagwirei’s Sakunda Holdings has set aside $3,2 billion to support government’s response to COVID-19 for the next 12 months, NewsDay Weekender has learnt.

Tagwirei, through his Sakunda Arundel Group, yesterday donated an ambulance to United Bulawayo Hospitals (UBH) during the official opening of Old Bartley’s Memorial block at the referral hospital.

The COVID-19 isolation centre, with a 50-bed capacity, was renovated by government with the support of Sakunda Arundel Group, which has also adopted 60 beds at Parirenyatwa Group of Hospitals.

Sakunda has already adopted and fully equipped the UBH’s COVID-19 isolation and treatment centre which was officially opened by President Mnangagwa yesterday. Sakunda also donated another ambulance to Gwanda Hospital.

The $3,2 billion injected by Sakunda will go towards operational costs and staff salaries, the company’s chief operating officer Mberikwazvo  Chitambo has revealed. The centre now has a staff complement of 42, who include specialists.

Sakunda is carrying out philanthropic works through its Arundel Clinic after Mnangagwa invited private players to come on board and support government efforts to fight the disease.

Mnangagwa commended Sakunda for the gesture and urged other companies to come on board.

“I commend the Arundel Sakunda Group for complementing government efforts towards the establishment of this strategic COVID-19 isolation and treatment facility,” he said.

“The kind gesture and act of good corporate citizenship is worth emulating. I, thus invite other private sector entities to continue to utilise the health sector-co-ordinated framework as we build sustainable institutions and systems for the post-COVID-19 era.

“I challenge other organisations and professionals, both within the country and abroad, in various medical specialist fields to also take up the challenge as we accelerate the modernisation of our health service sector,” he said.

Sakunda is doing similar works at Parirenyatwa Group of Hospitals.

“Our walk with COVID-19 scourge started this time last year when the nation heard me say Sakunda would bring 30 tonnes of equipment to combat the scourge,” Chitambo said.

“Then we donated the 26-bed Arundel COVID-19 Hospital in Harare. Its services are free, from blood tests to treatment. We also have Parirenyatwa Hospital which we have adopted for the next 12 months we shall finance its operating costs for free. After that, we shall engage our cooperating partners, government.”

He added:  “UBH unit is another free COVID-19 unit; we shall finance its operating costs for the next 12 months.  After 12 months, we shall engage our next partners, the government.