Sanctions: It’s time to hit back at US and its puppets

Source: Sanctions: It’s time to hit back at US and its puppets | Herald (Opinion) 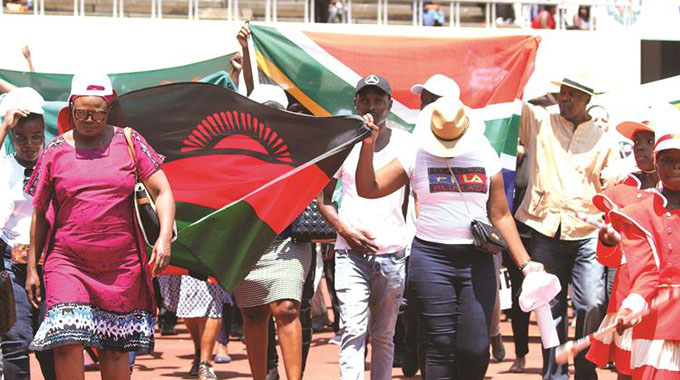 FLASHBACK . . . SADC nationals take part in an anti-sanctions march in solidarity with their Zimbabwean counterparts on October 25

The world over, nations have been faced with moments to decide, in direct response to either historical, present or future threats to the national interest.

Zimbabwe is not an exception.

The unfortunate reality is that when the nation arrives at such an interregnum, not every citizen realises it.

It becomes dangerous when even some in key leadership positions like Parliament become part of the fraction of unconscious citizens who are unaware that the nation has reached a crossroads.

There are various factors that birth such ignorance and lack of consciousness.

Mostly, these reasons border on unbridled ambition as well as having elements of unrevolutionary disposition manning key positions in the ruling parties, government and/or government institutions.

This explains why President Mnangagwa has warned saboteurs in the party, in Government and in Government institutions, that the marinated whip — shamhu ine munyu — is on its way.

As a direct follow-up to the people’s solidarity march against sanctions on October 25, this article answers the question: Which stage are we as a nation that makes it imperative to rethink our strategy on sanctions and national developmental question as a people?

The incontestable fact of the matter is that Zimbabwe’s political and socio-economic fundamentals have been operating on a wretched and regrettable pedestal, with the illegal sanctions imposed on the country and maintained by an aimlessly stubborn superpower, the USA, being the elephant in the room.

The culmination into these sanctions and their genesis is not a matter of debate for all Zimbabweans, but one whose writing is on the wall. Sanctions and isolationist policies against Zimbabwe were provoked by the land reform programme, which took place at a time when the Americans, in cahoots with the British government of Tony Blair, were frothing for regime change fronted by the MDC.

The call for the imposition of such heinous sanctions was amplified by the MDC of Morgan Tsvangirai, rogue civil society outfits and the Zimbabwe Congress of Trade Unions (ZCTU), whose rank and file was pivotal in drafting the sanctions Act by the USA which is known as the Zimbabwe Democracy and Economic Recovery Act (ZIDERA).

Actually, the prominent legal minds from the MDC which has morphed into MDC-Alliance assisted in the drafting of the sanctions Act against Zimbabwe.

These are cardinal facts that must forever be captured in black and white in our historical curriculum to ensure generations post the current one know where the country is coming from, where it is now and where is it going — the interregnum.

Most crucially, even as SADC decided to set aside that day in solidarity with the people of Zimbabwe who have been left toiling, soiling and wailing due to these illegal sanctions, it is the responsibility of Zimbabwean academics, leaders, business and scribes to remind, inform and, if possible, educate regional stakeholders on the historicity of these sanctions so that they are alerted of the internal culprits who have committed themselves to cause, justify and lobby for the continuation of these sanctions.

The world must be aware that inasmuch as October 25 was supposed to unite the nation in denouncing these sanctions, Messrs Tendai Biti, Nelson Chamisa and the rank and file in MDC-A have remained the stumbling block to Government and regional efforts to have sanctions against Zimbabwe removed.

The region must know that at the beginning of each year, the same culprits are called to the US to justify continuation and renewal of ZIDERA, something which they have publicly prided themselves in.

Mr Biti is on record as proclaiming that “we are going to call for more sanctions to ensure that this Government will not get a penny.”

As such, Zimbabwe has endured systematic attacks on its economy and a well-orchestrated attack on its politics, particularly electoral politics, by self-appointed God’s deputies who claim to love our people more than we do. They claim to know what we want more than we do and most regrettably. Those who claim to know how we should solve our problems better than we who face them, notwithstanding that the bulk of our problems are a product of their tired regime change antics.

I had a rare opportunity to interact with the EU ambassador, Mr Timo Olkkonen, albeit at SAPES Trust where he and his colleagues frequent to justify the existence of sanctions. I left him frothing with anger after I asked him assertively but politely about his behaviour and that of his colleagues.

However, as the nation marched on the day of solidarity and the President expressed himself unequivocally on sanctions, it’s time to reflect and challenge the nation to redefine its political culture.

Zimbabwe needs to follow the footsteps of other countries that have faced similar challenges but have used strong reprimanding and punitive legislation to stop, penalise and criminalise nefarious political conduct.

If there has ever been the time for a Zimbabwean model of a Patriot Act and or a model Logan Act, then it is now.

The circumstances, trials and tribulations that have faced this country for the past two decades owing to these sanctions and the resilience which our people have shown in the face of an unprecedented economic and social crisis in SADC particularly between 2002 to 2009 make us a great people.

They make us a great nation whose name will be remembered as a tiny but strong country that resisted peacefully, systematic bullying and attacks by a group of superpowers using Trojan horses in our midst.

The impetus of our people’s resilience for nearly 20 years of sanctions must be a source of pride, and most importantly, one that Government must provide objective complementaries to.

The systematic renewal of ZIDERA and sanctions against Zimbabwe by the US despite spirited and genuine re-engagement attempts by President Mnangagwa and his Government is a clear slap on the face of our people and exposes US hypocrisy and her unrepentant indulgence in regime change politics nurtured around the MDC-Alliance. That this country is a product of blood and the sword of precious lives that perished to defeat imperialism and colonialism should never be forgotten, but must always be the hallmark of vigilance in defence of the national interest.

As such, the Parliament of Zimbabwe must rethink, in the national interest, ways of deterring threats by individuals, groups or entities who mobilise and lobby hostility against the state and its people. Legislation is the modern way of dealing with culprits who mobilise hostility and sanctions against the country, a situation that has left the country in perpetual grief.

The search for political power becomes criminal if it involves treasonous plots such as sanctions, threats of violence or soliciting for external military interventions.

In this light, it is completely erroneous to ignore the burden of sanctions, which continue to haunt us today as a nation and hinder our developmental prospects. Indeed, something has to be done.