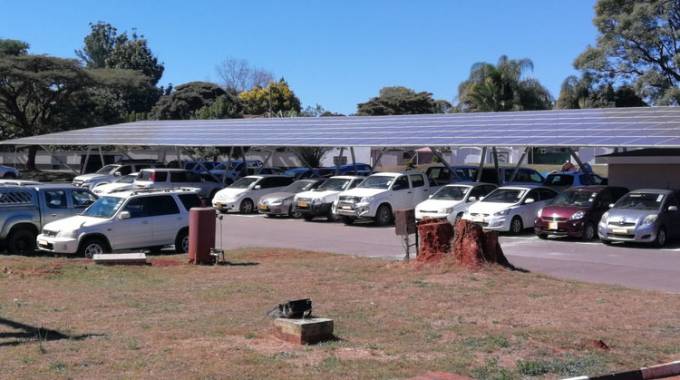 The Standards Association of Zimbabwe (SAZ) is working towards selling excess power from its 194kW solar car park to the national power utility, ZESA.

SAZ’s head office in the leafy suburb of Borrowdale, Harare, is now running 100 percent on renewable energy after a US$400 000 investment in solar energy.

The project is called a solar car park given that below the solar panels, vehicles can be parked, a move that maximises use of space at the same time generating energy.

SAZ executive director Dr Eve Gadzikwa told The Sunday Mail Business last week that since the launch of the solar car park on October 18 last year, the power has been stable and the organisation has cut its grid electricity bill. In fact, SAZ has excess power, which it is now considering to feed into the national grid.

“Since launching the project, we have been fully operational and I am happy to say that the power is quite stable and the whole idea is that we are now off the grid and we want to be using renewable energy,” said Dr Gadzikwa.

“Any excess energy that we have, we store it in some batteries and we can also sell some of the energy to the grid. We have not yet started (selling) but arrangements are in place because we are a licenced producer of energy.”

Dr Gadzikwa encouraged other companies to go “green” and save not only the environment, but also cut on their bills for grid electricity.

“We are also encouraging other companies to go green because we are national standards body so we are setting the standard for a renewable solar energy car park.

“The whole idea really is to promote a sustainable environment because when you look at the SDGs (Sustainable Development Goals) they talk about sustainability and we believe this is the way to go because God has given us 365 days of sun and, therefore, we should use the energy available to us,” she said.

Dr Gadzikwa wants the cost of solar equipment to come down so that renewable energy can be more accessible to ordinary citizens.

Presently solar equipment “is quite expensive”, making it difficult for people to join the green revolution.

“But in the long run, the return on investment would be very good.

“We have already reduced the amount of money that we used to spend on (grid) electricity. It has gone down. So we are encouraging other organisations to do like we did,” said Dr Gadzikwa.

Zimbabwe Energy Regulatory Authority (ZERA) acting CEO Eddington Mazambani told The Sunday Mail Business in emailed responses that; “The Ministry of Energy and Power Development is developing a national integrated energy resource plan and an independent power producer policy, which will guide Zimbabwe on the optimum energy mix over the years and also guide on the selection of power producers”.

“(The) renewable energy policy is due to be launched this year . . . (and) a power procurement framework is also under development which will bring about a competitive bidding for power generation as opposed to the current free-for-all-call-apply scenario,” said Mr Mazambani.

Meanwhile, SAZ has acquired a building in Southerton, Harare, which would be the Standards body’s new headquarters once renovations have been completed.

Dr Gadzikwa said the structure cost about US$1,1 million but the building still needs to be refurbished.

“. . . we are converting an existing building into an office that we can use, which is going to serve us and our needs. So there will be some costs to that. The estimates are around US$300 000. We should be able to renovate it and to put in place the correct partitioning, flooring, nice walls, which are consistent with a national standards body,” said Dr Gadzikwa.