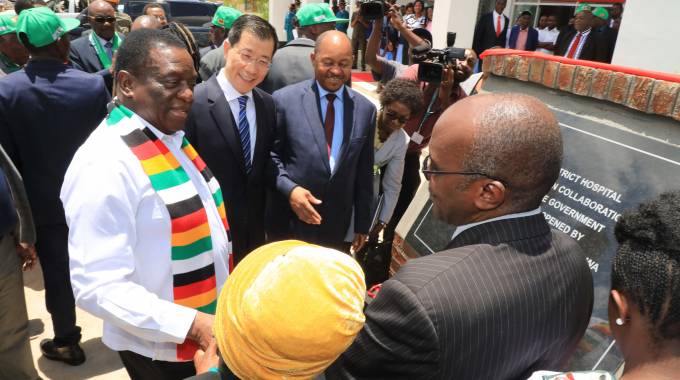 The immaculately built double-storey hospital is now poised to offer quality healthcare services to the community and beyond.

It is the first district hospital to have both a mortuary and a chapel. Construction of the hospital was bankrolled by China, as relations between Harare and Beijing continue to strengthen.

Government is presently targeting universal health coverage by 2030.Addressing multitudes that gathered for an anti-sanctions rally after touring the hospital, President Mnangagwa said there are plans to develop the facility into a specialist medical centre.

“It is well constructed and is one of the best hospitals that we have in the country. This hospital is for the people of Mahusekwa and they should come first in terms of receiving treatment. However, we are going to upgrade it. It was meant to be a district hospital, but we are going to make it a specialist centre and bring specialist doctors,” he said.

The President, who donated an assortment of medicines that he sourced from the Crown Prince of the United Arab Emirates, said he was going to seek further support for the hospital.

“I have compiled everything that is required here to ensure that the hospital maintains its status, and we fill the gaps of whatever else is needed. I am going to look for drugs and all other equipment, just like I did from the Crown Prince of UAE so that we complete the upgrade of this hospital.”

He paid tribute to the two resident doctors at the hospital, who have remained at work despite a two-month long strike by other doctors, some of whom have since been dismissed.

China was applauded for assisting in constructing the state-of-the art hospital.

Relations with China, which have since been upgraded to a Comprehensive Strategic Partnership, he said, were “critical for the survival of our country”.

“It is a level of relationship that we do not have with any other country in the world. The people of China have stood with us since the days of the liberation struggle and they continue to stand with us,” he added.

In his remarks, Chinese Ambassador to Zimbabwe Guo Shaochun said the hospital had been constructed by one of China’s top companies.

“The contractor of the Project Phase 2 — China Railway Sixth Group — is affiliated to China Railway Engineering Co-operation, which is a prestigious state-owned construction enterprise among Fortune Globe 500 Enterprises.

“By selecting such a competitive company to build the Mahusekwa District Hospital Project Phase 2, the government of China shows that it highly values the friendship with Zimbabwe.”

The hospital, he said, has extensively benefited the people of Mahusekwa.

“The construction of the hospital has created more than 200 jobs, hiring workers from the local area, purchasing more than 30 percent of the materials locally. In addition, after being put into operation, the hospital will significantly improve the health and medical care in the Mahusekwa area, providing better medical treatment and conditions for the local people.”

Health and Child Care Minister Dr Obadiah Moyo said the construction of the hospital will assist Marondera and Chitungwiza provincial hospitals, which can now refer patients to Mahusekwa.

The hospital exhibits the renewed thrust to bring health facilities closer to the people, he said.