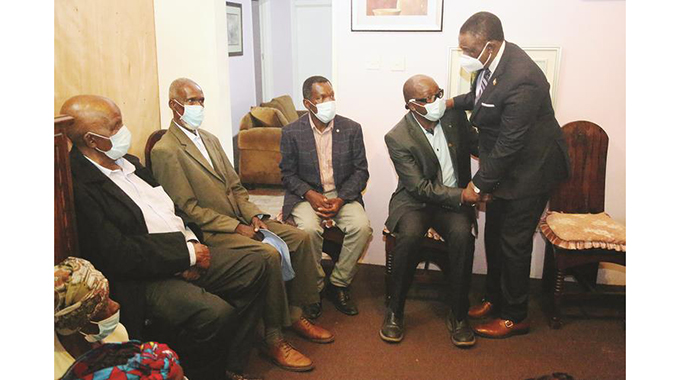 Government is accelerating efforts to manufacture drugs locally for ailments such as cancer through implementation of the triple helix model and is emphasising early treatment seeking behaviour.

The triple helix model is the interaction between academia, industry and Government to foster economic and social development, which is being vigorously pushed as part of efforts to attain an upper middle income society by 2030.

Vice President Dr Constantino Chiwenga who is also the Minister of Health and Child Care spelt out the vision at the Mbuwayesango family home in Harare yesterday.

The VP was paying his condolences following the death of Dr Noleen Mbuwayesango, the wife of renowned medical practitioner Dr Bothwell Mbuwayesango.

She died aged 55 after a three-year battle with cancer, leaving behind a husband and two children.

“Cancer is still a problem though it is being managed in some cases if you seek early treatment.

“We are collaborating; the Ministry of Health and Child Care, Industry and Commerce as well as the Ministry of Higher and Tertiary Education, Innovation, Science and Technology Development to see how we can quickly come up with a solution,” said VP Chiwenga.

Vice President Chiwenga said those claiming traditional medicines can cure cancer will not be overlooked, but their products must be subjected to scientific examinations.

VP Chiwenga paid tribute to the Mbuwayesango family for their contribution to the country’s medical sector, the latter has been involved in the training of medical practitioners, while her husband is renowned for leading two successful separation of conjoined twins.

He said Dr Mbuwayesango this year was involved in another historic operation at a time he was assisting his partner in the battle against cancer.

“I was informed of her illness, but we hoped that her condition would improve. She played a huge role in educating the country about health,” he said.

Family spokesperson Dr Lillian Lowe said her sister will be buried today at Glen Forest Cemetery in Harare, and also thanked the country’s leadership for commiserating with the family.