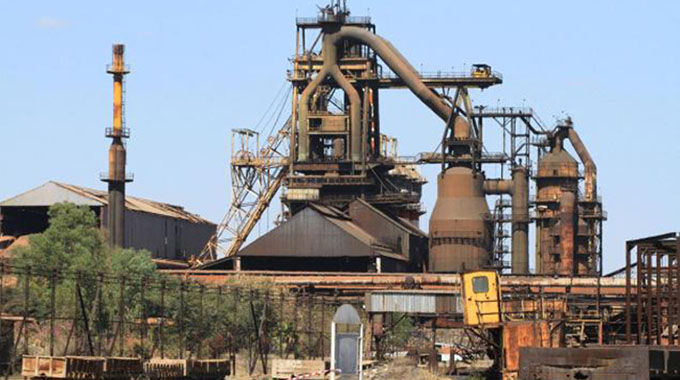 Zisco is 91 percent owned by the Government.

“We have done our due diligence on seven potential investors from Germany, China and Australia but we still have some from India making inquiries,” said Dr Nzenza in an interview yesterday.

Zisco stopped operations in 2008 due to lack of capital to recapitalise and poor management. With its furnaces having capacity to produce up to one million tonnes annually, the company was among Zimbabwe’s major foreign currency earners.

Zisco has been a subject of foreign investor interest in the past. Essar Africa Holdings, a unit of India’s Essar Group, had agreed to invest in Zisco in 2011 during the era of the inclusive Government, but the deal collapsed in 2015. This was after a similar deal with another Indian firm, Global Steel Holdings failed to materialise in 2007.

Essar planned to build a new steelworks complex, replacing the antiquated plant. It also planned to export products via a terminal it wanted to build in the port of Beira, Mozambique. The company was looking into the feasibility of building iron ore and coal terminals at the port of Beira. The other international companies that once showed interest in Zisco include ArcelorMittal South Africa, a unit of the world’s biggest steelmaker and R&F from China.

“Our national steel strategy will be anchored on the revival of Zisco and we are working with all stakeholders such as Zimbabwe Investment and Development Agency to realise this goal,” said Dr Nzenza.

Zisco started operations in Bulawayo in 1938, having been formed by a private consortium.

In 1942, the Government formed the Rhodesia Iron and Steel Commission, a statutory body that took over the steel works.

In 1946, a small plant was constructed at Redcliff and commenced production in 1948. Between 1948 and 1956, Zisco gradually expanded and a year later, the Rhodesia Iron and Steel Company was formed followed by an expansion programme, which saw the commissioning of modern blast furnaces and installation of the first coke oven battery.

The expansion of the plant continued until 1975 when blast furnace 4 was commissioned, bringing steelworks capacity to one million tonnes of liquid steel per year.

By early 1990’s operations at Zisco started deteriorating while mining costs at Buchwa Mine sharply rose, forcing the company to develop Ripple Creek Mine for the supply of iron ore to the blast furnaces.

Blast Furnace 4 was reaching the end of its lifespan and was taken off in 1994.  A Chinese company was contracted to reconstruct and reline the furnace, which was recommissioned in 1999.

Government said it will resuscitate Ziscosteel through innovation and harnessing inward opportunities, while working closely with local investors.

This  will be done through courting new investors who will bring new technology and  new skills.

While the search for new investors is in progress, the Government is currently implementing a short-term roadmap of resuscitating the firm’s subsidiaries which  include ZimChem, Lancashire Steel, and Buchwa Iron Mining Company (Bimco) among others.

Meanwhile, current operations are targeted at raising capital through the sale of  waste and boulders, among other activities, while plans are underway to resuscitate the mills to restart the manufacturing processes which are expected to benefit Lancashire Steel.

As such, $2,3 billion has been allocated to the Ministry of Industry and Commerce to spearhead the industrialisation thrust.