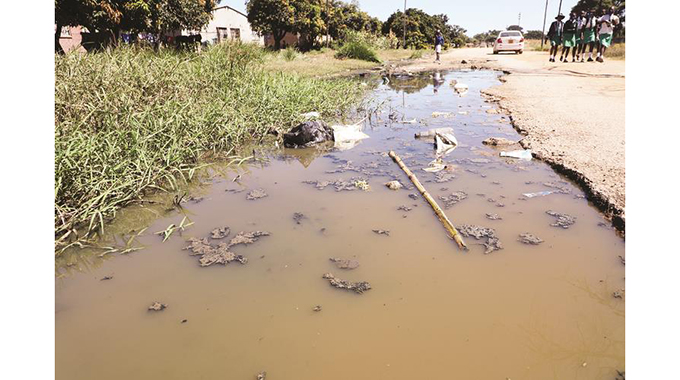 Raw sewage is flowing inside houses and business premises in some parts of Glen View 3 in Harare, sending residents into panic mode amid fresh fears of water borne disease outbreaks.

The area has seen cholera and typhoid outbreaks that have claimed lives over the past years due to a poor sewer reticulation system that has been getting less attention from Harare City Council. The hit area this time is along First Drive opposite Glen View 1 High School. The area also surrounds Munyarari shops.

Some of the affected residents yesterday said several attempts to have the sewer bursts attended by council officials have been fruitless.  There is a sewer pipe which burst a few weeks ago. The local municipality was contacted and they had not attended to the problem for close to two weeks.

“The sewage is now flowing inside houses since the reticulation system is blocked. Council’s snail pace is despite the fact that Glen View has been the epicentre of the 2018 cholera outbreak,” said Mr Taurai Chimusoko.

Another resident only identified as Mai Tino blamed the council officials for dragging their feet in attending to the sewer bursts.

“Our lives are in great danger due to these insensitive officials. We approached them two weeks ago, but to no avail,” she said.

“We received the report of that issue and a team has been sent to attend to it. We encourage all residents to report any burst for quick response,” he said.

Contrary to Mr Chideme’s remarks city officials at Glen View administration offices said they were unable to attend to sewer bursts due to lack of the required equipment.

“We cannot attend to the bursts because we do not have the rods for sewer chokes. The one set of rods we have has been sent to Mufakose,’’ said a council official who pleaded for anonymity. A quick search yesterday showed that a complete new set of rods cost less than US$50.

A visit at the site also showed that at Munyarari shops there was a rivulet of raw sewage flowing while some vendors were seen selling all manner of products including vegetables and chicken cuts next to uncovered human waste. The sewage was also observed flowing at Glen View 3 High School, thereby exposing both learners and authorities to disease outbreaks. Images have since gone viral on social media of blocked toilets with sewage flowing inside houses, streets and wells where people fetch drinking water due to erratic supplies.

In one of the pictures children could be seen playing in the sewage.