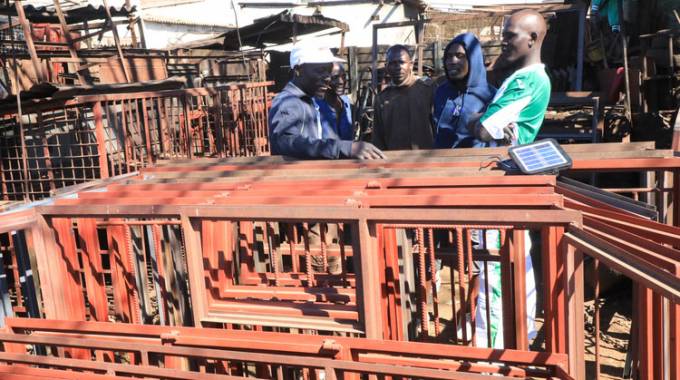 It has just gone past 10pm at a local home industry — kuDurawall — in Glen View and the sound of steel grinders, welding machines and hammers banging against steel sheets envelope the usually quiet environs.

Activity begins to pick up pace at this ungodly hour after a 17 hour-long daytime slumber.

In times gone by, kuDurawall used to be a tranquil and restful setting during this time of the night.

But things have changed.

Zesa’s heavy load-shedding schedule — through which power is only restored between 10pm and 5am — has gradually turned working schedules upside down.

Small and medium-scale enterprises now sleep during the day and work at night.

Typically, kuDurawall is popularly known for its small steel works and serves clients around Glen View 1 and Churu Farm.

Admire Mugodhi, who runs a small welding enterprise that manufactures door and window frames and an assortment of other metal products, says he has had to change his work routine to fit the load-shedding schedule.

“We only get electricity after 10 at night,” he says as he sets up his equipment in preparation to start work.

“As you can see, all my equipment uses electricity, there is no way I can operate without electricity.

“Since we only get power at night that means I can only work at night.”

He says he now spends his day in bed.

But this seemingly punishing routine has had its downside on his business as walk-in clients dwindle.

And also working at night, he adds, compromises the quality of his products.

David “Diva” Nyandima, who runs a small confectionery enterprise in the same high-density suburb, where he backs, cookies and scones, says he is slowly getting used to the new unfamiliar routine.

“I am yet to get used to working at night,” he says.

“Sometimes I doze off and some of my products get burnt in the oven.

“Products that get burnt obviously have to be thrown away and this is costing me a lot of money.”

What makes his job doubly taxing is that in the afternoon he has to sell his wares.

While some enterprising entrepreneurs have now resorted to using diesel-powered generators and small solar power units, this proposition is a non-starter for power-intensive businesses.

Even for those who use solar and diesel generators, the cost of acquiring them is prohibitive.

The cost of fuel, which is usually acquired from the black market, also remains forbidding.

For Nyararai Muteve – a welder a Highfield’s famous and busy Gazaland Shopping Centre — he has had to switch to liquid petroleum gas (LPG) to power his welding machine.

But this comes at a price.

LPG as selling for anything between $13 to $15 per kilogramme, which is more or less his monthly electricity bill.

It puts an extra cost on the business.

The challenges the small businesses are facing are shared across the country.

This has a heavy toll on the informal sector, which is one of the biggest employers in the country.

In 2017, the International Monetary Fund (IMF) indicated that the country’s informal sector could be the sixth largest in the sub-Saharan region, contributing between 40 percent and 50 percent to economic growth.

“Most small businesses have been forced to work during night-time hours, which does not augur well for business,” says Mr Mutambanengwe.

“Obviously the situation does not bode well for business because if you have no power, then you do not work.

“Unless one is working in the CBD (central business district), they are adversely affected because there is no way anybody can work during the day when there is no power.

“Obviously this is affecting their earnings . . .

“Electricity just has to be available; it is just like water,” he said.

Government, he added, should address the current sub-economic tariffs that are militating against investment by independent power producers and affecting Zesa’s ability to import power from the region.

“You cannot price electricity at 9 cents (Zimbabwe dollar), which is equivalent to US$ 0,01, it does not make sense.

“Obviously we have to have the correct tariff regime and it has to enable IPPs to produce power and supply.”

“We can put big solar panels there at places like Siyaso (Mbare) and we can create a small virtual power station, and it can be done at reasonable costs.

“It can provide power for them for light electrical jobs but not heavy-duty machinery.

“So it’s a project that the City of Harare can do and they can also derive revenue from it.

“If they were to install such a system, those people can pay a small fee, it can be even $5 a month or something like that but it will ensure that they are not getting it for nothing.

“Industry cannot be allowed to stop.”

Load-shedding has increased outside the published schedule due to soaring demand in excess of 1800 MW against generation of about 1100MW.

Output at Kariba Hydropower Station has also plummeted to 355MW from a potential 1 050MW due to reduced water levels in the Zambezi River, especially after El Nino-induced low rains in the river’s catchment area. Neighbouring Zambia has been equally affected.

Zesa is failing to compensate the shortfall with imports as it owes significant amounts to suppliers in South Africa and Mozambique.

But Government is actively seeking to augment local power generation through imports from Mozambique and South Africa.

Negotiations are underway with both Pretoria and Maputo, with an agreement expected soon.