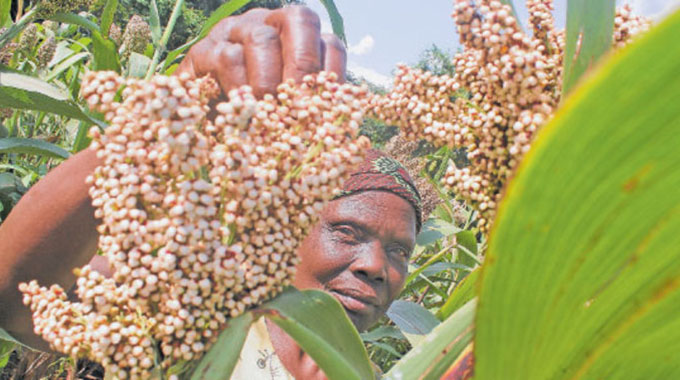 Due to their drought-resistant nature, farmers, especially in dry regions, have been encouraged to grow these varieties to promote food security and nutrition in the face of climate change effects.

“The GMB would like to advise farmers in drought-prone areas that it has sorghum and pearl millet seed (small grains) in stock at depots under the Presidential Well-Wishers Inputs Scheme.

At commercial level, production of small grains is still low. In most cases, production of these is for household consumption while others grow them for local traditional brew.

In a recent interview with Seed Co Limited group chief executive officer Morgan Nzwere, indications were that while seed producers are working on early maturity varieties as well as drought-resistant crops to mitigate against the effects of climate change, uptake of small grains is still minimal.

Farmers, even in dry areas where small grains thrive still prefer maize as the crop of choice.

Small grains thrive in areas where there is little rain and agriculture experts are encouraging farmers to take them up and cushion the estimated 1,1 million people in dry areas.

According to the Food and Agriculture Organisation (FAO) most of the small grains produced in Zimbabwe is consumed by the producing household or sold in the informal markets, mainly for traditional beer brewing.

Small grains are seen as the answer to food security in Zimbabwe, especially at a time climate change threats on agriculture continue.

Companies that produce the small seeds and those specialising in the production of traditional brews and larger sections are major beneficiaries of the crop.

Weather experts have forecasted normal to below normal rainfall this 2018/19 agriculture season therefore creating scope for farmers to put focus on small grains to mitigate the effects of the possible drought.

“It is critical that farmers embrace the production of small grains in their cropping to mitigate the risk of the forecasted El-Nino induced drought during the 2018 /19 season,” said GMB.