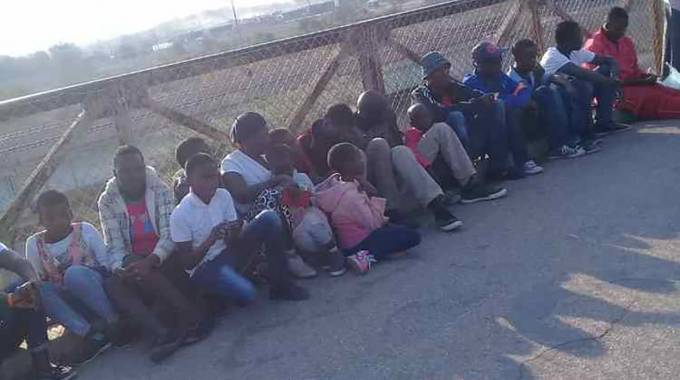 BEITBRIDGE Border Post is one of the busiest ports of entry in Sub-Saharan Africa through which goods worth millions of dollars are transported.
Over 3,6 million people cross the border annually.

Currently, the border is closed to human traffic.

Only cargo is allowed to pass through as part of measures to contain the spread of the novel coronavirus.

Zimbabwean authorities and their South African counterparts have tightened security to thwart cunning border jumpers who have the propensity to sneak in and out without going through mandatory quarantine and testing for Covid-19.

This is risky as the returnees are absorbed into communities without taking necessary preventative measures to stop the spread of the deadly virus.

The bulk of Zimbabwe’s 343 Covid-19 positive cases (by Friday) were imported from neighbouring South Africa, where cases have surpassed 60 000.

Apart from returnees retracing their footsteps through formal channels, authorities have in recent weeks seen an upsurge in smuggled goods from south of the Limpopo as criminals avoid paying customs and excise duty.

The smuggling goes both ways, with cigarettes from Zimbabwe also making their way to South Africa illegally.

According to the Framework Convention on Tobacco Control, it is estimated that one-third of illicit tobacco in the neighbouring country is from Zimbabwe.

Smuggling has also been made easy by low water levels in the Limpopo River, which provides a thoroughfare for those with a penchant to skip the official port of entry.

Last week, The Sunday Mail trailed illegal border jumpers who have set up base near the border.

Some have built temporary shacks from where they are conducting their business.

Law enforcement agents arrested Fungai Chibusha, Bernard Promise and Sithembiso Ndlovu after they were caught smuggling goods near Panda Mine along the Limpopo River.

“Police seized the goods and arrested the trio. The groceries and clothes were taken to the Zimbabwe Revenue Authority (Zimra). There is an ongoing operation to deal with ports of entry and we urge Zimbabweans to observe customs and excise regulations and declare their imported goods properly. Those who commit crime will be arrested,” said Asst Comm Nyathi.

Police say a further 22 smugglers were arrested from the Limpopo River in recent weeks, while several vehicles carrying goods worth nearly R1 million were also seized.

The groceries and electrical gadgets attracted a customs import duty of R551 737.

But authorities in Harare and Pretoria are growing increasingly worried.

Since beginning of April, there has been a rampant smuggling of both people and goods, raising the spectre that these unregistered travellers could also inadvertently transport the coronavirus between the two countries.

Vehicles with border jumpers or smuggled goods shuttle between Beitbridge, illegal crossing points along the Limpopo River and Musina, a South African town that is 16 kilometres south of Zimbabwe.

There are an estimated 200 illegal crossing points along the borderline, which are managed by only eight security bases on the Zimbabwean side.

On the other side of the river, South Africa has erected a R37 million fence to deter illegal movement of goods and people, but that has not deterred the wheeler-dealers.

Those that are using illegal points to cross into either country pay between R50 and R100 for access to opportunists who have formed informal toll gates along the way.

In addition, for transportation from the towns, people pay between R300 and R5 000 depending on the luggage they would be carrying.

“This is everyone’s fight (against coronavirus) and we are working with all like minds to ensure that the risk associated with the spread of the pandemic through illegal migration is minimised,” said Mr Moyo.

Beitbridge East legislator Cde Albert Nguluvhe said the Parliamentary Portfolio Committee on Security and Defence was ensuring that the border was sealed.

“The situation along the border is worrisome. We need to act and I have engaged the police, who are already seized with the matter.

“At the same time, we are saying let’s work together to stop criminal activities that are detrimental to both public health and security,” he said.