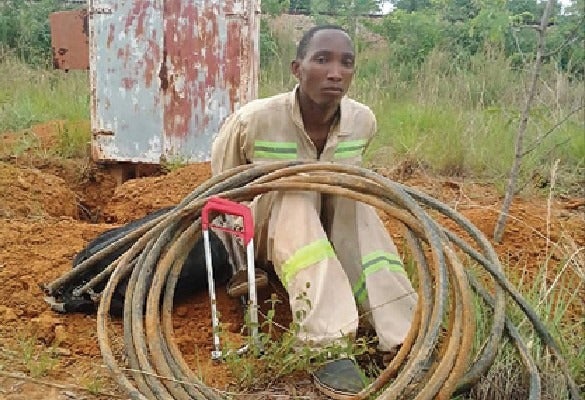 A Zimbabwe National Army (ZNA) member was on Sunday night arrested in Chegutu by National Railways of Zimbabwe (NRZ) security guards after he was caught red-handed stealing copper cables while three other people were nabbed the same day in Gweru on similar charges.

NRZ spokesperson Nyasha Maravanyika confirmed the developments and revealed that there was strong suspicion that powerful politicians were behind syndicates of copper cable thieves since habitual culprits normally mysteriously end up scot-free.

“I can confirm that our security guards in Chegutu and Gweru on Sunday night arrested thieves who were digging up underground copper cables which are used for signal communication for our personnel in trains along the railway lines. In Chegutu, the person arrested was a soldier and he is Corporal Witness Mpofu. As for Gweru, the culprits were ordinary civilians who reside in that city,” he said.

Mpofu, whose force number was recorded as 80127F of Pomona Barracks, resides in Pfupajena suburb in Chegutu.

He was allegedly caught digging up copper cables at the 390km peg between Bedford and Mupfure siding on the NRZ map.

Those arrested in Gweru were identified as Johannes Tsikira of Mkoba 10 Gweru, Owen Phiri (29) and Elfat Ncube (35) both of Mkoba 9. They were found digging up the copper cables at Dabuka NRZ Station.

Midlands provincial police spokesperson Inspector Joel Goko yesterday said he was travelling to Bulawayo so was unable to give details of the incident.

Maravanyika said the value of the stolen cables in Chegutu and Gweru would be evaluated in Bulawayo.

“The trend we are seeing is that in most of the cases, the people who are arrested are the same on different occasions, which means they will be repeat offenders,” he said.

“This raises suspicion that powerful politicians and businesspeople must be behind the syndicates which is why they find their way out of custody after we hand them over to the police.”

National police spokesperson Chief Superintendent Blessmore Chishaka said two other occupants of the Nissan Caravan commuter omnibus escaped. He said the conductors were stolen from Unki Mine in Shurugwi.