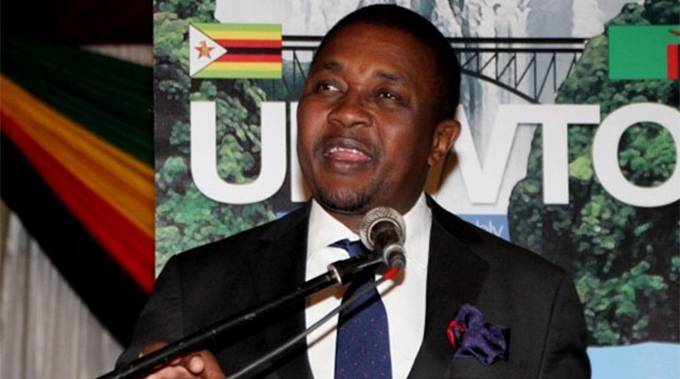 Prosecutor-General Mr Kumbirai Hodzi feels the three Ford Ranger T6 double cab vehicles and a Tata Xenon were bought from funds donated to Government by the corporate world ahead of the UNTWO conference, hence the two ex-ministry officials had no legal right to grab them.

The quartet has pending criminal cases related to the vehicles in question.

Mzembi, a fugitive from justice, is yet to be apprehended, but his case is also pending.

To that end, Mr Hodzi has filed an application for civil forfeiture of the cars, saying they were tainted property.

The vehicles are already held as exhibits, but Mr Hodzi wants them permanently forfeited to the State.

In his application for a civil forfeiture order, Mr Hodzi says: “In 2011, Zimbabwe and Zambia won the bid to co-host the 20th United Nations World Tourism Organisation (UNWTO) Conference in August 2013.

“Government assigned Mzembi to come up with various ways to raise money for hosting the conference. Mzembi engaged Kuhudzayi and Mushore as consultants to carry out fund-raising activities on behalf of the ministry.”

Mr Hodzi said the ministry’s mandate was to fund-raise with local and international corporate companies, donors and financiers.

This led to the signing of a professional conference organiser (PCO) contract on May 15, 2012 between the ministry and the contractor valid for 24 months.

Kuhudzayi and Mushore were signatories to the PCO contract.

Remuneration for consultants was based on a success fee between two to three percent depending on the value raised.

The vehicles were to be used before and during the hosting of the UNWTO and they were registered in a UNWTO trust which was not registered with the Registrar of Deeds.

Sangarwe took possession of a Ford Ranger T6 (registration number ACU 6801) and did not surrender it after the conference.

The Zimbabwe Anti-Corruption Commission (ZACC) investigated the matter, the vehicle was recovered and Sangarwe charged.

Kuhudzayi took the other Ford Ranger T6 (ACU 3707) contrary to Government procedures. She sold the vehicle to Grey Hama and was later arrested.

“Mzembi took a Ford Ranger (ACU 7946). In March 2013, Mzembi approached Mimosa Mine through its chairman, Mr Winston Chitando, who donated a Tata Xenon double cab (ACX 5409) for use at the conference,” read the application.

Mushore took possession of the vehicle. These vehicles are tainted and liable to forfeiture.