POLICE yesterday warned mourners and family of the late socialite and businessman Genius “Ginimbi” Kadungure, who died in a horror car accident in Harare on Sunday against flouting COVID-19 regulations during the funeral wake. 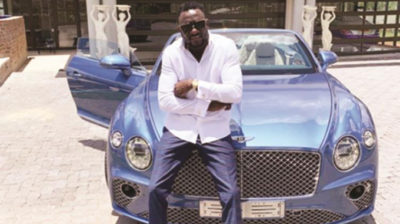 “The Zimbabwe Republic Police implores the organisers of the funeral of the late Genius Kadungure to observe COVID-19 regulations, especially with regards to wearing of face masks, social distancing and the maintenance of law and order between 13th and 14th November,” said national police spokesperson Assistant Commissioner Paul Nyathi.

He also ruled out a live music concert organised in honour of the socialite.

“The organisers are reminded that under COVID-19 regulations, funerals are still restricted to not more than 100 people. Musical performances or concerts are prohibited. Mourners are therefore urged to observe the law for the safety of others and themselves,” he said.

Ginimbi (36), died when his Rolls-Royce vehicle collided with a Honda Fit while driving back to his Domboshava home in the company of Limumba Karim, believed to be from Malawi, socialite Mitchel “Moana” Amuli and Alichia Adams from Mozambique. They all perished at the scene of the accident with Karim, Amuli and Adams burnt inside the car after Ginimbi was pulled out just before the vehicle went up in flames.

The accident occurred while the quartet was coming from Moana’s 26th birthday party at Ginimbi’s Club Dreams, formerly Sankayi in Harare’s Avenues area.

Close family members yesterday told NewsDay Life &Style that there was a tiff between Ginimbi’s ex-wife Zodwa Mkandla and her father-in-law Anderson over control of the funeral proceedings.

“The clash was caused by the suggested all-white farewell. Zodwa knows many of Ginimbi’s friends so when they suggested to her that they wanted an all-white farewell for their friend in respect of his wishes as he used to say before his death, she agreed, but his father later turned it down,” the source said.

“This is where all the problems started. The father said he was against the idea as it would appear to have endorsed what is in the public domain that those white parties were associated with some rituals that were being done by Ginimbi and friends.”

“You know that old man is a no nonsense guy, he just said ‘no’ to that all-white dress cord on the burial as they were suggesting. He said he had heard a lot said about Ginimbi’s all white parties which were even hosted beyond the borders.”

“The family said there will be no all-white party farewell and this has been communicated to Ginimbi’s friends. They have maintained that Ginimbi will be laid to rest according to our custom so no one will be asked to put on the all-white dress code,” the source said.

Zodwa could not be reached for comment last night.

Ginimbi’s burial is set for tomorrow at his million-dollar mansion in Domboshava near the capital Harare.