Stiffer penalties for non-wearing of masks 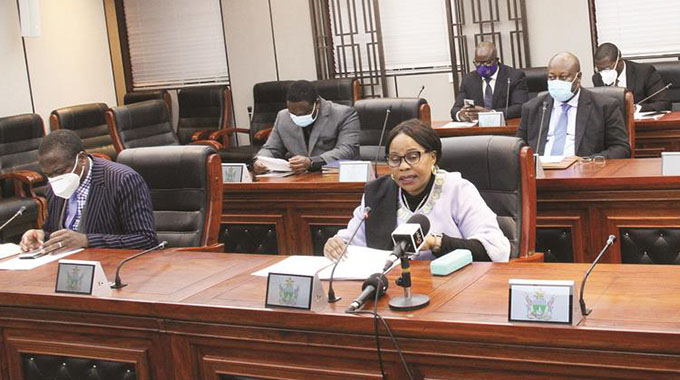 Cabinet was briefed by the Honourable Vice President KCD Mohadi, as Chairman of the Ad Hoc Inter-Ministerial Task Force on the Covid-19, on the steps that are being taken to contain the spread of the pandemic.

The cumulative number of confirmed cases has risen by 65.6 percent in the past week from 1 034 to 1 713, while the cumulative number of confirmed local cases has risen by 204.9 percent from 286 to 872. Most of the local cases are in Bulawayo (490) and Harare (212).Preventative and control measures against Covid-19 will be intensified in order to avoid overwhelming the health delivery system through the mandatory and correct donning of masks. Government will be seeking to impose stiffer penalties for the non-wearing of masks.

His Excellency the President will be issuing directives regarding the way forward in the management of the Covid-19 response.  The Government wishes to inform the nation that most of the Covid-19 cases are asymptomatic and can be isolated at home or in isolation facilities. On a related matter, Mater Dei Hospital, a private institution in Bulawayo, has developed and equipped an 18-bed Covid-19 critical care facility. The Ministry of Health and Child Care will enter into a Memorandum of Understanding with Mater Dei Hospital so that critically ill Covid-19 positive cases from the public sector can be admitted and treated at no cost to the patient.

UPDATE ON THE GASTROINTESTINAL DISEASE OUTBREAK IN LUVEVE, BULAWAYO

The Minister of Local Government and Public Works updated Cabinet on the Gastrointestinal disease outbreak in Luveve, Bulawayo, where a total of 1 900 cases had been attended to at health facilities.

Cabinet noted that a number of interventions that have been put to contain the gastrointestinal disease outbreak include the following: (a) community awareness programmes; (b) engagement of local leadership and community structures to help sensitise communities; (c) waiving of water shedding in the affected areas; (d) conducting door to door surveys to actively identify diarrhoeal cases and systematic sampling of diarrhoeal cases and testing them for Covid-19.

Cabinet received a presentation from the Minister of Justice, Legal and Parliamentary Affairs on Principles to amend and strengthen the Copper Control Act (Chapter 14:06). The upsurge in cases of vandalism and theft of copper cables and transmission equipment across the country has necessitated the amendments to the Act.

The thefts have resulted in destruction of ZESA, TelOne and National Railways of Zimbabwe (NRZ) infrastructure, loss of revenue as well as loss of lives in some instances due to accidents involving naked and exposed power cables. The resultant toll on the economy in general cannot be overemphasised.

The amendments seek to institute stiffer penalties in order to curb the theft of copper and related products and thereby safeguard the critical infrastructure. In more detail the Amendment Bill will seek, among other provisions, to criminalise: (a) vandalism of equipment and theft of power transmission cables; (b) dealing in stolen copper; (c) all dealership without possession of certificate of origin for all the copper they deal in; and specify the penalties for these offences. The mandatory sentence for those found dealing illegally in copper will be thirty (30) years.

PROPOSED RATIFICATION OF THE MINAMATA CONVENTION ON MERCURY

Cabinet approved the proposed ratification of the Minamata Convention on Mercury, which was presented by the Attorney General, it is a global treaty intended to protect human health and the environment from the adverse effects of mercury and its compounds.

Some of the provisions of the Convention are as follows: a ban on new mercury mines and the phasing out of existing mines; the regulation of mercury releases from boilers, incinerators and power stations; the exchange of information on mercury-free alternatives; and the management of mercury waste in an environmentally friendly manner.

The convention includes the development of appropriate strategies for identifying and assessing sites contaminated by mercury, possible remedies to protect populations that are at risk, the promotion and facilitation of public information dissemination on the effects of mercury, and a provision for States to register for special exemptions.

The Minister of Finance and Economic Development presented the Devolution and Decentralisation Policy, which was approved by Cabinet as part of the National Development Strategy (2020-2025) formulation process. The policy establishes the necessary conditions for Provincial and Rural District Councils as well as other lower-tier governance and administrative structures to exercise devolved powers. Contributions from provincial and district sectors encapsulated in Provincial Economic Development Plans will accomplish the Vision 2030 requirement for Provincial and District Gross Domestic Product values and their contribution to the National GDP to be specified in the country’s economic indicators. In essence, therefore, the National GDP will be the sum total of provincial GDPs. Most notably, the Devolution and Decentralisation Policy ensures a participative bottom-up approach to development from the village, ward, district and provincial levels to the national level.

In accordance with section 264 sub section 2 of the Constitution, the Devolution and Decentralisation Policy seeks to achieve the following objectives, among others: Facilitation of democratic participation of people in making decisions that will affect them; Promotion of good governance; Maintenance of Zimbabwe as a single and peaceful State; Enhancement of citizens’ participation in the management of local affairs and development; Provision of a mechanism for resource sharing; and capacitation of the lower tiers of Government. Implementation of the policy will entail the development of a fiscal distribution formula designed to achieve equitable development in all sub-national tiers of Government.

Meanwhile, the current five percent of fiscal revenues being availed to the sub-national tiers are subject to programme-based funding requirements which are being applied to central Government entities by Treasury. Local area programmes and projects are already being funded from this fiscal revenue stream.

The governance structures proposed by the Policy will enhance local governance decision-making and promote the rapid development of local economies through leveraging of local resources to Fund specific development programmes and priorities. Capacity-building is emphasised in order to promote successful implementation of the Policy.

REPORT ON HIS EXCELLENCY THE PRESIDENT’S TOUR OF COAL AND COKING COAL PROJECTS IN HWANGE: 16 – JULY, 2020

The Minister of Mines and Mining Development briefed Cabinet on His Excellency the President’s tour of nine coal and coking coal projects in Hwange to assess progress being made in the implementation of the Coal and Hydrocarbons Development Plan. Cabinet appreciated the significant progress recorded to date, noting that the projects represent the successes being achieved under the ongoing economic reform programme. The projects show that Zimbabwe is on course to attain its goal of being a net exporter of energy by 2023 and to be fuel self-sufficient by 2030 through development of energy minerals. The President commissioned a coke oven battery which came into operation at South Mining in November 2018. Another success story is the Jinan Integrated Production project which has projects that are almost ready for commissioning.

Zambezi Gas is working on an integrated project to produce 750 megawatts of electricity from its coal mine. The company is 100 percent indigenously owned and is professional in its approach as evidenced by its remarkable rehabilitative works. Zimbabwe Zhongxin Coking Company is advanced towards producing 430 megawatts from its Sinamatella coal field, and the enabling agreement to finalise the works was signed during the tour. Western Areas coal mine is on course to produce 750 megawatts.

Other benefits of the projects include electricity exports; coal mineral products beneficiation and exports; explosives, lime, stainless steel and other products for domestic use as well as exports; and extensive employment creation. Other projects which the President toured are Tsingshan Integrated Production; Hwange Colliery Company and Makomo Resources.

Together with other new coal and power initiatives on Binga, Zimbabwe has over 5 000 megawatts of power production in the pipeline. These projects will see Zimbabwe being not only self-sufficient in electrical power by 2023, but subsequently being a net exporter of electricity.

Court Case to Compel Implementation of Section 210 of Constitution