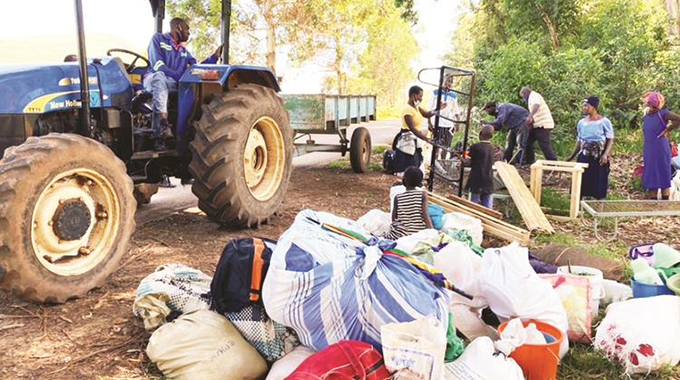 Africa Moyo and Elita Chikwati
Government has moved in to evacuate people who might be affected by Tropical Storm Chalane in Manicaland Province where it is expected to make landfall today.

Last night, Tropical Storm Chalane was coming ashore near Beira, with the outlying clouds expected to reach Manicaland in the early hours of today in Chimanimani and Chipinge.

The Meteorological Services Department (MSD) expects the cloud system to move across Zimbabwe into Botswana, with the main effect being heavy rains of up to 50mm a day in some areas, and more in a few places but still around a quarter of what was seen with Cyclone Idai last year, and the main danger being flooding in areas prone to flooding during heavy downpours.

Chalane is far smaller and weaker than Cyclone Idai which hit Zimbabwe last year, with wind speeds at their maximum as it reaches the coast being well under half of those of Idai and thus the energy and forces being well under a quarter. But the cloud system is carrying a lot of water that will fall as rain today, tomorrow and Friday, although again a quarter of the Idai levels, hence the warnings and the stress on those in areas prone to flooding to seek better shelter.

While no compulsory general evacuation orders have been considered necessary, six Zupco buses, tractors and lorries have been deployed to Manicaland to move families that have seen flooding around their homes in past downpours to the 464 centres identified to house people at risk of mudslides, landslides, flash floods and collapse of walls.

“The cloud system goes ahead of this by about 500km. It should be affecting Manicaland province as we get into the early hours of tomorrow (today).

“We still give an advisory for areas such as Chimanimani into Chipinge area where we are expecting heavy downpours. We advise the general public to take care as the system is still expected to spread across the country also giving localised heavy downpours in its wake as it takes a track towards Botswana covering much of the country as it progresses,” said Mr Ngoma. The public has been urged not to cross flooded river during this period.

Both are boarding schools and have decent facilities.

However, some residents resisted early evacuation, telling Civil Protection Unit teams that they will go once it starts raining while others want to move in with their relatives living in safe areas.

Government has availed fuel worth $700 000 while development partners, private companies and church organisations, have also chipped in with help.

Mr Seenza said their teams continue to raise awareness among the people on the possible dangers posed by the anticipated tropical storm, considering that the province had already experienced heavy rains this season in areas such as Nyanga, Chimanimani and Chipinge, and the water table is high.

“If we get more rains from the tropical depression, we might experience mudslides, landslides and of course flooding of some rivers. We have moved some already internally displaced people; 54 people to St Patricks and 64 people to Mutambara,” he said.

“Those are not the only ones, as I speak to you now, there is a bus in Chimanimani on standby waiting to evacuate those that have had second thoughts. “We have established 464 evacuation centres in the province and these were identified by the District Civil Protection Unit in conjunction with other stakeholders.”

Water and sanitation services have also been provided at the evacuation sites.

Mr Seenza said eight command centres have been set up in Manicaland, with TelOne moving in to establish telephone communications for easy of communication.

The Ministry of Transport and Infrastructural Development is monitoring the road network and they are fixing problems where there are challenges for some movement of both vehicles and people.

Critically, people with chronic diseases such as high blood pressure (BP) and HIV/ Aids have been advised to replenish their supplies to ensure they won’t need to start running around when the tropical storm strikes.

Mr Seenza said the Ministry of Health had “prepositioned medication in all areas” to ensure those in need access the drugs.