‘Stricter water rationing on the cards for Harare 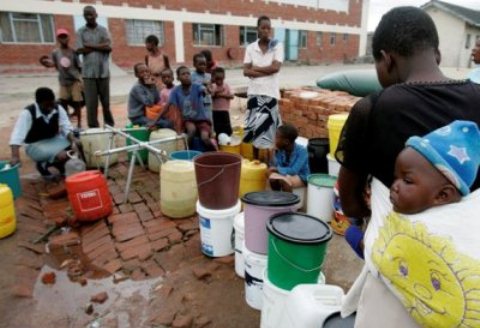 HARARE City Council (HCC) is set to introduce a stricter water rationing regime as dam levels at Lake Chivero continue dwindling.
Acting distribution manager Tapiwa Kunyadini told a full council meeting that the city’s raw water was now very concentrated with nitrogen and phosphorus because there has not been any significant rains.

The engineer’s remarks come as Mabvuku councillor Munyaradzi Kufahakutizwi had asked why some suburbs continue to suffer water shortages. “We will be instituting a stricter water rationing regime especially for areas in the northern suburbs to 72 hours per week to allow for pumping to Highlands and Pomona areas. We have stopped drawing water from Prince Edward Dam because it is now very low and cannot be extracted. Apart from the poor rains, our major problems now are chemicals and rehabilitation of our treatment works which may take a lot of time,” Kunyadini said.

He emphasised that the raw water quality was now extremely concentrated and needed a lot of chemicals to delineate to make it fit for human consumption. The council engineer indicated that council was now pumping 300 megalitres of water daily against 620 ML they were pumping last year.

“We are hoping that with the works that we are undertaking to the various clarifiers at Morton Jaffray and the commissioning of Avondale pump station, we will be able to have returned water production to over 500 Ml by end of April,” he said.

Environmental management committee chairperson Kudzai Kadzombe said the city should look into other sources of water as a matter of urgency. She said alternatively, council should also have additional mobile water treatment units to draw water and treat it from smaller sources.

“The engineers should look into other methods of purification because the number of chemicals we are using is too much. We understand that the quality of our raw water is extremely bad but the chemicals used should be reduced,” Kadzombe said.
Water rationing comes as HCC is also looking to investors for three additional mobile treatment units that will pump water to suburbs such as Glen Lorne, Borrowdale, Mabvuku, Tafara, which have gone for years without municipal water.