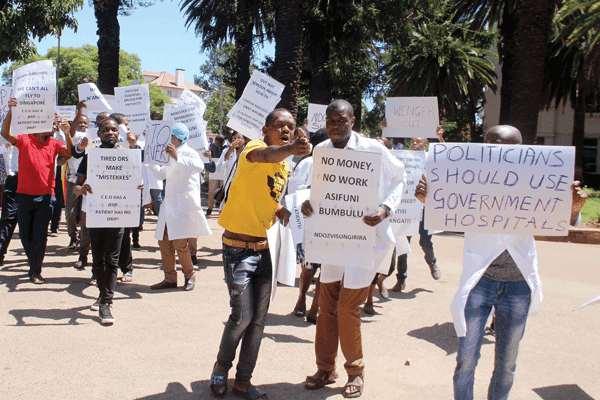 Public hospital doctors have vowed to continue with their strike, which started on Tuesday this week, despite the government’s move to ban all forms of industrial action.

Cabinet on Tuesday announced its proposal to include doctors on the essential services list comprising of police, prison services and the army.

The proposal, if passed, would see doctors only being allowed to picket at their employer’s offices for a few hours without embarking on full-blown strike action.

In a statement on Wednesday, Zimbabwe Hospital Doctors’ Association (ZHDA) said the announcement by Health minister Obadiah Moyo of a ban on further strikes by doctors was unconstitutional.

“We have noted with concern unsettling and unconstitutional statements made in the afternoon of yesterday (Tuesday) by the Health minister to bar our members from exercising their labour rights to collective job action in cases of labour disputes with the employer.

“Dr Obadiah Moyo is campaigning for a legislation that is not in keeping with modern-day labour practices anywhere in the world. The purported Bill seeks to deprive doctors of their right to strike and collectively table labour disputes,” part of the statement read.

ZHDA dismissed as false, State media reports that the Health Services Board had finally reviewed their salaries as they were yet to receive communication on that regard.

“We would like to make it very clear that we simply don’t have the capacity to report for duty anymore. Unless and until this grievance is dealt with accordingly, we will not be able to resume work. We derive no pleasure in abandoning patients. We call upon the minister and the employer to find a solution to this impasse before they endanger more lives,” the statement said.

In surveys conducted by NewsDay yesterday, only a few doctors could be seen at both Parirenyatwa and Harare Central hospitals.

Efforts to get official comments from both hospitals hit a wall as calls went unanswered by the time of going to print last night.

Patients who spoke to NewsDay said there was a visible difference in service provision by the doctors since Tuesday.

The situation has remained the same in Bulawayo hospitals as the large chunk of junior doctors did not show up for duty at the city’s two major health institution – Mpilo Central Hospital and the United Bulawayo Hospitals (UBH).
A visit to the health institutions established that even nurses were sending back some outpatients on grounds that there were few doctors who were attending to the patients.

Mpilo Hospital clinical director Solwayo Ngwenya said: “Only 18 junior doctors came to work out of 57. We are working and it’s better than in previous days which were devastating. We are trying to manage the situation.”

A nurse at the hospital, who spoke on condition of anonymity, said patients were being turned away as there were no doctors.

A visit to UBH at 3pm showed that some patients were being attended to although service was slower than usual.