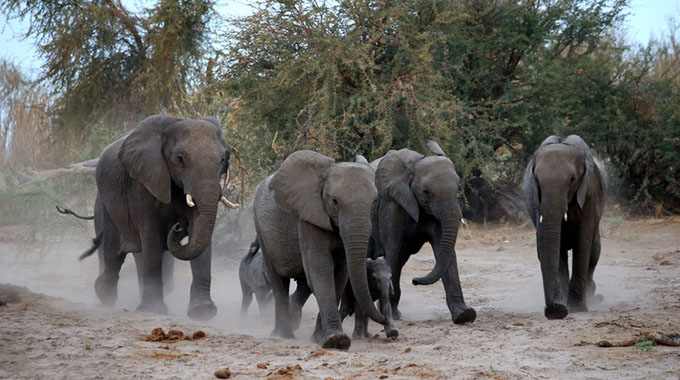 Isdore Guvamombe Reflections
The Mana (four) Pools are now a pale shadow of their normal selves, turning into mere mud ruts. Even the adjoining mighty Zambezi River itself has lost its glamour and grandeur and has shrivelled to an unprecedented low, leaving it like a mere a serpent of little water, sandwiched by sand.

Under the blistering heat, a breeding herd of elephants blocks the way and a cow nudges its calf under a huge baobab tree on the roadside. An irritated bull tells off a wandering calf in a no-nonsense mood, with a shriek, but firm voice.

The elephants tolerate the presence of a small vehicle for a few moments, but as soon as their snorkelling trunks sniff human presence they retreat in polite disgust.

A few metres away, giraffes forage the bush for little everything else left by the ravaging drought, heads up in indignation above stunted mopane bush shrubbery. The mopane bush shrubbery is level at about two metres high, on a browse line that looks as neatly trimmed as a schoolboy’s new haircut.

Soon a haulage truck appears, its groggy voice, the hissing and puffing is telling of the energy sapping load it has transported. Unbeknown to the wildlife, the truck carries life. It is life itself.

Impala scamper for dear life on spindly legs and the big baboon strides to a huge tree in a hunched and swaggering gait. Kudu, look up, poise their corkscrew horns in an arrow shape and bullet off.

But baboons are baboons. Stubbornly looking back the huge baboon barks a loud “boohoo!” as if shouting obscenities to the truck driver, before climbing up the tree. From that vantage point they look on.

Since June this year, the foundation identified the need to supplement the feeds for wildlife in Mana following a poor rainy season. Wildlife have found life hard in the drought and without supplementary feeding, face death.

“This is the future. We cannot let drought destroy wildlife. For 10 years we have been doing a lot and acting on each situation in the wildlife sector, thanks to our good working relationship with the Government of Zimbabwe, through the Zimbabwe Parks and Wildlife Management Authority.

“We are currently heavily involved in supplementary feeding of wildlife affected by drought together with other stakeholders. And we have single-handedly as a foundation transported nine haulage trucks carrying 30 tonnes of hay, each, to Mana Pools.

“We continue to monitor the situation and do necessary interventions,’’ says foundation chairman Dr Li Song.

Since then, the foundation has transported 270 tonnes of hay to Mana Pools and has now been joined by other organisations, mainly local wildlife enthusiasts.

Without the supplementary feeds, this year’s drought would have spelled disaster and decimated the wildlife population in Mana Pools.

For those not in the know, the foundation was launched in September 2015 at a local hotel and since then it has done a lot to save wildlife in Zimbabwe.

The Sino Zimbabwe Wildlife Foundation has since its formation donated two aeroplanes to ZimParks, a helicopter and a microlight plane and provide back-up parts and training for the pilots.

It has also donated three boats and six drones for anti-poaching. Again it provides back up parts and training for the drones and boats.  Sino Zimbabwe Wildlife Foundation is also known for providing radio sets, bags, tents and linen for wildlife rangers.

It has also brought into Zimbabwe seven teams of volunteers including two professors from the China Academic School of Science and is now working on establishing research centres and laboratories for wildlife throughout the country’s national parks.

“We are also looking at highly ambitious project to set up a research and laboratory at Hwange National Park, where a lot of wildlife is found and facing difficulties.

“It is going to be much about education research purposes. Working on how to manage sustainably wildlife in Zimbabwe and in everything we will be working with National Parks and Wildlife Management Authority.

“But for us it is purely charity work. It is about how to improve the sustainable management of wildlife in conjunction with ZimParks.

“So far, we have invested about $800 million on wildlife projects and programmes and more is coming,’’ said Dr Li.

Mana Pools is one of Zimbabwe’s best and verdant national parks when all is well. Its location along the Zambezi River north of Zimbabwe, downstream the Kariba makes it a place for pristine wildlife.

There, after angrily gushing out of the wrath of the cruel turbines in its escape from Lake Kariba, the Zambezi River water appears a bit fatigued as it disappears into a narrow gorge that looks like an abyss on its final stretch to Cahora Bassa .

Surprisingly, the river thereafter, emerges from the deep gorge reinvigorated and spreading into a flattened, fertile and vast expanse of floodplain that geomorphology condemned into twists and turns that systematically formed four (mana in Shona) pools, and ox-bow lakes.

Here, the mighty Zambezi River flows through the Lower Zambezi Valley bordering Zimbabwe and Zambia, as a huge rift in the earth’s crust.

Over the millennia the Zambezi has rushed through this valley creating islands, channels and sandbanks.

In normal times, this abundance of water and luxuriant greenery accounts for the valley’s wealth of big game.

The pools are forever bursting with a profusion of birds and animals, especially during dry season from June to October.

Within the stunted bush shrubbery and lush vegetation surrounding the four huge pools, buffalo graze hurriedly conscious of stalking lions and appear always restless while on the trees, chirping birds somersault from one branch to another.

For those who have fallen in love with nature, the effortless aerial displays of dragonflies on the lily-studded water ponds are a spectacle to watch.

It is common spectacle to see a huge elephant bull, stand on its hind legs, its trunk attempting to reach for its lunch from a sausage tree.

This is Mana Pools, where Zambezi River changed its course a long time ago due to massive siltation, forming four distinct ox-bow lakes.

The national park is home to magnificent and enormous elephants that return year-after-year to the same places and are well known to the locals in the area.

Big, beefy and stocky black buffalo are always about and predators like leopards, lions and cheetah are seen regularly.

The pools are also a haven for crocodiles and large hippo pods. To the south, far distant blue hills of the Zambezi Escarpment, give a good background for the human eye.

But it is the four main pools and several smaller pools scattered along the river course and the cliffs hanging over the river and floodplains that provide shelter to a large and varied wildlife population.

The Long Pool is the largest and extends some 6km in a west to east direction. Lovely big old trees, provide a shady canopy with sparse undergrowth. This makes for easy walking and is one of the reasons why this area is perfect for walking safaris.

Mana Pools National Park stretches across 2 000km² of prime Zambezi river front vegetation, much of which is inaccessible except on foot and as a result is completely virgin.

The geomorphology includes islands and sandbanks fringed by dense forests of baobab mingled indigenous trees, as well as the rugged Zambezi escarpment.

In the south, Chitake Springs is of vital importance to the interior of the park as the springs form a crucial source of water as the river systems dry up during the dry season.

Here, wildlife congregate around this precious water resource and walking safaris to the area are intensely exciting and full of action. This is recommend for more experienced safari enthusiasts.

The park is open to cars only during the dry season and during the rainy season guests have to travel on foot or by boat.

When all is said and done, The Sino Zimbabwe Wildlife Foundation will go down into the annuls of history as that organisation, that, together with other stakeholders saved many wildlife from drought.