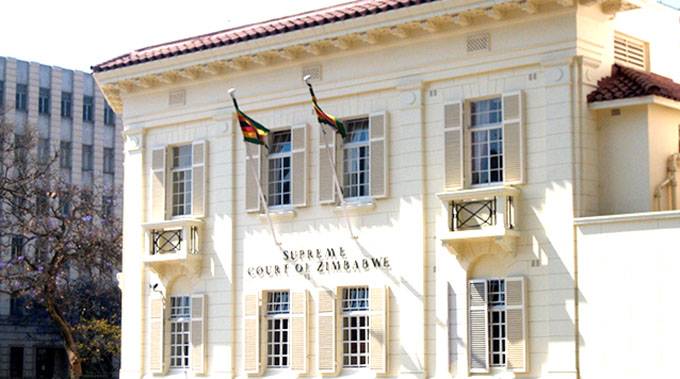 Daniel Nemukuyu
Investigations Editor
The Supreme Court has blasted suspended High Court judge Justice Erica Ndewere for refusing to furnish a prisoner with a full judgment when denying him bail, saying such conduct is not expected of judicial officers.

Justice Ndewere, who is on suspension pending a disciplinary tribunal, threw out an application for bail pending appeal by convicted housebreaker Tapson Nyowani, but did not hand down a judgment explaining her decision.

The judge is under investigation for delays in writing her judgments. She also stands accused of failing to properly read a record of proceedings resulting in the quashing of a repeat offender’s prison term on the basis that he was a first offender on review.

While a tribunal set by the President is yet to determine her suitability to continue serving as a judge, Justice Ndewere has been criticised for the delay.

While Nyowani still lost his bid for bail, Justice Nicholas Mathonsi took a swipe at the conduct of Justice Ndewere saying judges were obliged to give written reasons for their decisions through full judgments.

“There is no judgment of the court a quo refusing bail pending appeal. In fact, the judge a quo did not prepare a written judgment and upon being requested by the appellant to give reasons for dismissing the application, she commented that the reasons were given in the presence of the appellant. She then flatly refused to render any further reasons for judgment,” said Justice Mathonsi.

When Nyowani asked for a judgment, Justice Ndewere, through her clerk, refused to issue a detailed judgment.

The letter reads: “I gave the reasons in court, in the presence of the applicant. The reasons I gave are as summarised in the typed State response whose copy he was served with, that he had no prospects of success against both conviction and sentence because there was overwhelming evidence against him as well as his identification by witnesses.

“So he can use those reasons if he wants to appeal against my decision.

“He ought to have noted the reasons for my decision in court.”

“With respect, this is a very unorthodox way of giving reasons for judgment. It becomes extremely difficult for this court to assess the soundness of the decision of the court a quo refusing bail given that this court does not engage the matter as a court of first instance. It is settled that a written judgment is the foundation stone upon which a litigant builds or loses his or her hopes of succeeding on appeal.

“It is also trite that judicial officers are obliged to give full written reasons for judgment.

“This they do as duty owed to the consumers of their services, the litigants. Reasons that are stored in the mind of the judge are of no benefit to the litigants or the administration of justice, and a judicial officer should dispel all fears of arbitrariness by rendering a written judgment,” said Justice Mathonsi.

However, after hearing the case, the Supreme Court agreed with Justice Ndewere that Nyowani had no prospects of success on appeal. “There is no basis for interference with both the exercise of the court a quo’s discretion and its factual finding that he has no prospects of success.

“Indeed the power of this court to interfere with the decision of the court a quo in a case of this nature is limited to instances where the discretion was exercised so unreasonably as to vitiate the decision made,” he said.

A three-member tribunal led by retired judge Justice Simbi Mubako was sworn in recently by President Mnangagwa to inquire into the fitness of Justice Ndewere, to hold office.

The other members are lawyers Mr Charles Warara and Ms Yvonne Masvora.

Justice Ndewere was automatically suspended following the President’s appointment of the three-member team on the recommendations of the Judicial Service Commission (JSC).

The commission reportedly alleges slipshod work and a large batch of overdue judgments.

The Constitution provides that a judge may be removed from office only for inability to perform the functions of his or her office, due to mental or physical incapacity, or gross incompetence, or gross misconduct. Otherwise judges serve until retirement or resignation.

The process is deliberately designed to ensure judges have practical independence since ruling against the Government of the day in a judgment cannot lead to a tribunal hearing.

The Constitution further stipulates that if the Judicial Service Commission advises the President that the question of removing any judge, including the Chief Justice, from office ought to be investigated, the President must appoint a tribunal to inquire into the matter.

He does not have much discretion in the matter.