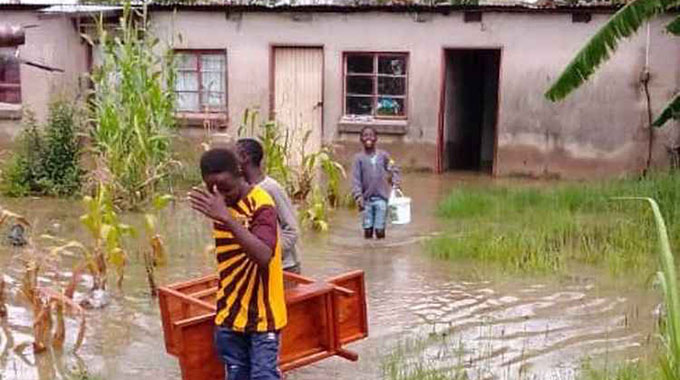 The flooding of scores of houses built on or near wetlands in various parts of the country following the unusually heavy rains that pounded the country in recent days, points to corruption and weak implementation of existing environmental laws that prohibit construction on undesignated land on rivers and delicate ecosystems such as wetlands.

In and around, Harare several homes built on undesignated land on the edges of streams and rivers as well as wetlands saw homes in parts of Glen View and Budiriro suburbs of Harare — getting flooded.

Rain-triggered disasters also led to the destruction of several homes and other vital infrastructure in a number of areas dotted around the country.

There have been numerous reports of homes having been demolished, crops destroyed and roads swept away due  to the incessant rains received in the country.

Informal settlements that have mushroomed in and around major cities and towns, many of them located on wetlands and river banks, are the hardest hit.

These settlements have no requisite water and sanitation facilities. In addition, they do not have proper and functioning drainage systems.

Government and local authorities still face an uphill battle to regularise the settlements and set up proper  infrastructure due to sticky issues such as corruption and land barons, lack of expertise and the general lack of resources to undertake such capital intensive projects.

Without proper road infrastructure, water sources and sewer systems, the residents of these settlements that have sprouted in Harare and other major towns and cities, often end up digging up wells and constructing pit latrines anywhere, putting themselves at risk of contracting waterborne diseases as well as risking the flooding of homes.

Local authorities such as the Harare City Council have on several occasions denied allegations of doling out the irregular stands, instead accusing land barons for the settlement crisis.

The councils have the responsibility to construct and inspect drainage and sanitation systems in residential stands.

Within the city centre, the council has failed to clear drains, leading to waterlogging in various roads.

The wet spell has exposed many residents in Budiriro 5, Monavale,  Chitungwiza, Marlborough and other various areas situated on sensitive wetlands ecosystems to flooding.

Because of corruption within local authorities acting in collusion with land barons, people with homes built on sensitive ecosystems, are paying a huge price in terms of destruction of property and risk of death and diseases.

The Harare Wetlands Trust and other environmental activists have repeatedly appealed to the government and the Environmental Management Agency to save the remaining wetlands ecosystems that are crucial to maintaining vital water sources.

The country has seven protected wetland sites and has a total of 1 117 wetlands covering 793 348 hectares which is about 1,5 percent of the country’s land area.

Zimbabwe now needs to take practical steps to stem the progressive encroachment on and loss of wetlands now and in the future through collaboration with various local and international organisations.

The country, which ratified the Ramsar Treaty in 2011, now has seven wetlands that have been declared as Ramsar sites.

Monavale Vlei, Lake Chivero and Victoria Falls wetlands were once on the verge of complete destruction through rapid urbanisation but intense lobbying saved the fragile ecosystems.

The designation of a wetland as a Ramsar site enables the exchange of standardised information on conservation practices and technical  assistance and lends international tourism value to a place.

“In spite of these protections, developments on wetlands continue unabated due to legislative loopholes, administrative deficiencies within local authorities and lack of proper collaboration between the ministries of environment, local government, lands, Environmental Management Agency and local authorities to monitor the status of wetlands leading to unprocedural developments on wetlands,” the Harare Wetlands Trust said in a report.

The trust said it was worrying that permits continue to be issued to allow for developments on wetlands.

“The authorities are called upon to apply the legislation more rigorously to restrict, suspend and revoke the issuance of permits and for the government to amend legislation to provide greater protection for wetlands,” it said.

Environmentalists also expressed concern that the change of use, subdivisions and allocation of public wetlands is taking place in secrecy without proper public consultation and notification.

Even in rural areas, reports abound of chiefs and headmen dolling out land on riverbanks and wetlands leading to siltation of major rivers and dams as well as destruction of homes and property due to flooding.

Environmental Impact Assessments are being ignored in most cases due to corrupt practices within local authorities and shadowy land barons.

All this points to the need to strengthen enforcement powers of EMA — to demolish unlawful developments on wetlands.

Demolitions have often led to a public outcry and EMA and local authorities need to clean up their act and stop developments on time before wetlands are filled with houses.

According to the Intergovernmental Science-Policy Platform on Biodiversity and Ecosystem Services (IPBES) report released in 2019, Africa is experiencing a dramatic loss of biodiversity.

Experts estimate that by 2100, climate change alone could cause the loss of over half of African bird and mammal species, as well as trigger a 20 percent – 30 percent  decline in lake productivity (the plant and animal life produced by a lake), and a significant loss of plant species.

Africa which is home to a rich and diverse animal, plant, and marine biodiversity could lose this vital ecosystem service which drives the continent’s economy and acts as a buffer to climate change.

Ongoing threats to African biodiversity from natural habitat loss and degradation (specially from agricultural expansion, direct over–exploitation of wildlife and fishery species and the spread of certain non-native invasive species have compounded the situation.

This loss of biodiversity affects livelihoods, water supply, food security and lessens resilience to extreme events, particularly for people living in rural areas who are often the poorest.

If no action is taken to halt the loss of biodiversity on wetlands in Zimbabwe, the negative impact will be felt intensely in the coming decades apart from the flooding of homes we are seeing today.

We need to safeguard wetlands that are habitats to a wide range of plants and wildlife. They are responsible for recharging the water table, filtering and purifying water, preventing soil erosion, siltation and flooding.

Wetlands present a platform for ecological services, regulating and providing convenient water for many communities supporting fauna and flora.

Wetlands are also handy in purifying and replenishing ground water.

They act as sponges in holding water during the rainy season before releasing it slowly to the surface. They are buffer  zones that reduce flooding and mitigating against climatic disasters such as droughts.

The issue of unlawful settlements on wetlands needs to be addressed head–on, not only to save lives and property, but to conserve our biodiversity for future generations.