WHEN Kudakwashe Tagwirei’s father passed away in May 2018, the government came to a standstill.Cabinet was postponed, President Emmerson Mnangagwa, Vice-President Constantino Chiwenga, ministers and senior government officials drove to Shurugwi for his burial. 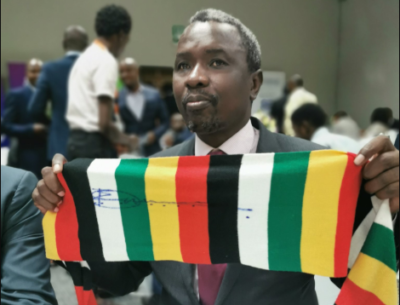 It was a sad time for Tagwirei, but the funeral served to underline his growing influence and, to some extent, control over the executive.
Tagwirei is Mnangagwa’s adviser and sometimes travels with him on foreign trips.

His business empire has grown in leaps and bounds since the November 2017 coup which toppled Robert Mugabe while catapulting Mnangagwa to the presidency.
Tagwirei is in the money. He is raking in millions of United States dollars, but his murky dealings — facilitated by his proximity to power — are increasingly inviting scrutiny from a sceptical public.

Some critics say Tagwirei could soon become to Zimbabwe what the Gupta brothers were to South Africa during former president Jacob Zuma’s time at the helm.
Godfrey Tsenengamu and Lewis Matutu, when they were Zanu PF youth leaders back in February, were reprimanded for naming Tagwirei among people whose role in a collapsing economy must be closely assessed.

Tagwirei’s flagship company, Sakunda Holdings, which has enjoyed a fuel monopoly for years, has been running the controversial Command Agriculture programme, viewed by many as a looting project.

A 2017 government audit report by Auditor-General Mildred Chiri revealed that the company had failed to account for about US$3 billion disbursed under the Command Agriculture programme, raising fears that public funds were misappropriated. The money was disbursed without parliamentary approval and supporting documents from the Ministry of Finance and Reserve Bank of Zimbabwe. The money did not go through the Agriculture ministry.
Curiously, Sakunda got involved in the project during the time Mnangagwa was the vice-president and responsible for the implementation of what was originally touted as a grain import-substitution scheme.

Sakunda later told parliament that a total of US$1 billion had been used for the project between June 2016 and May 2019 and not the US$3 billion that had been earlier reported.

Sakunda was also involved in the diesel-fuelled Dema Emergency Power Plant contract worth US$498 million.

Initially, a United States company, APR, had won the tender but the Office of the President and Cabinet arm-twisted Zesa into awarding the tender to Sakunda, without going to tender, as reported by the Zimbabwe Independent in a series of news articles in 2016.

A PricewaterhouseCoopers (PwC) audit report tabled in parliament in March confirmed that tender procedures were not followed in the deal.

The government rejected a proposal by South African company Mining Oil and Gas (Mogs) for the establishment of a second pipeline, saying the industry had enough players.

The business mogul is also involved in a sprawling mining business where he recently acquired shares in Great Dyke Investments and Bindura Nickel Corporation Limited (BNC) through Landela Mining Venture and Sotic International.

Through Landela Mining Venture (Landela), he last year bought a 50% stake in the US$4 billion Great Dyke Investments (GDI) platinum project following the departure of the Zimbabwe National Army.

In a statement issued last year by GDI, the company developing the mine, announced that Landela and Afromet JSC now have equal 50% stakes in the project. Afromet JSC is 100%-owned by Russia’s investment and industrial group Vi Holding, which has spearheaded the Darwendale platinum project since inception in 2013.

He also bought a major stake in BNC after the departure of ASA through the Mauritius-based Sotic International Ltd, which owns Zimbabwe’s Landela Mining Venture Limited.

Bank accounts belonging to Landela Investments and Sakunda together with other accounts linked to Tagwirei have previously been frozen by the Reserve Bank of Zimbabwe (RBZ) as the central bank battled to suppress illegal foreign currency trading on the parallel market, before the suspensions were lifted under a cloud.

Through Akribos wealth managers, Tagwirei bought 24% of Zimbabwe’s biggest bank (by assets), the CBZ.
Tagwirei once worked for the bank in 1996 as a senior manager for system development. The businessman is also spreading his tentacles to the medical field, through Sakunda.