Taj Abdul, 7 others in court 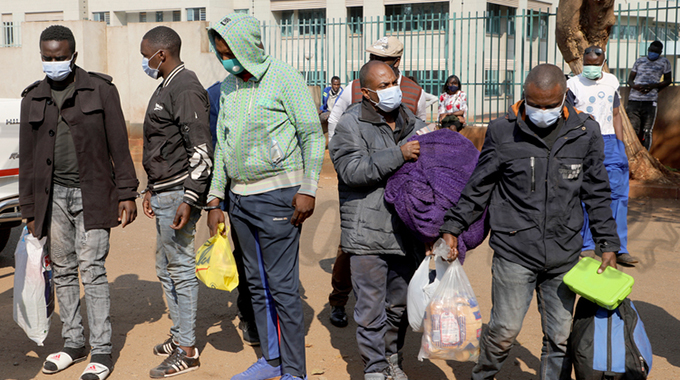 Most wanted armed robber Taj Abdul, commonly known as Salim Rahman (holding a blanket) and some of his accomplices at the Harare Magistrates Courts yesterday. — Picture: Justin Mutenda

Prosper Dembedza Court Correspondent
The eight suspected armed robbers, most of whom had been on the most-wanted persons’ list for years and who were arrested in a major raid in Beitbridge on Monday, appeared in court yesterday for their initial remand.

They were not asked to plead when they appeared before magistrate Mr Richard Ramaboa who remanded them in custody and advised them to apply for bail at the High Court.

Magistrates do not have jurisdiction to grant bail for those accused of serious crimes of violence.

Although the eight were arrested on Monday, police obtained a warrant earlier this week allowing them to hold them longer than the normal period for questioning.

Defence lawyers — Tawanda Takaindisa and Ashley Mugiya — raised complaints that their clients were bitten by police dogs at the time of arrest. The raid on the Beitbridge house that netted the eight was led by CID but with back up from dog handlers and the Support Unit.

The lawyers asked the court to allow their clients to show the injuries they sustained as a result of the dogs’ attack. Mr Ramaboa ordered the State, led by Mr Michael Reza, to investigate the complaints raised.

Giving details of the first of the two robberies forming yesterday’s charges, the State heard that on July 24 the gang, with others still at large, attacked 40 Longford Street in Queensdale, Harare, arriving in separate vehicles.

They removed precast wall panels to gain entry into the stand and then, masked and armed with a shotgun and a pistol, forced open the lounge door with an iron bar and allegedly confronted the complainant’s brother-in-law who was seated in the lounge.

He shouted for help and fled towards the kitchen intending to escape through the back door where he was confronted by another robber who was standing outside the house.

They manhandled him and tied his hands from behind with shoelaces. It is alleged that the gang went on to confront the complainant who had locked himself in the bedroom from the inside together with his wife and children.

They forced open the door with an iron bar and confronted the family before ordering the couple to lie down on the floor while covering the wife with a blanket. They assaulted the complainant demanding cash and valuables while ransacking the room.

They allegedly stole US$1 473 from the wife’s handbag and 5 cellphones, handbags, eye glasses, power banks, face masks and valuables. The total value of the stolen goods was US$7 516.

On the second robbery, it is alleged that on the following day, July 25, the accused persons in the company of their nine co-accused persons still at large, armed themselves with a shotgun, pistol, hammer and iron bars and went to the Trauma Centre at 1 Borrowdale Lane.

Upon arrival, they ordered security guards Simbai Pawandiwa and Jerifanos Fana, who were manning the entrance, to lie down but the guards ran towards the premises shouting for help.

The accused ran after them, firing shots. Pawandiwa hid in a toilet while Fana ran into another toilet situated near the administration block. The gang broke the door of the toilet in which Fana had hidden, manhandled him, hit him with a hammer on the head and demanded to know where the safe was.

The gang also allegedly broke down the door to the office of Cheril Masvosva and threatened her before stealing her cellphone.

The gang then confronted Wilbert Tokoda, who was in the security room, and threatened to shoot him with the shotgun and ordered him to lie down. They tied his hands behind with cable tires and force-marched him into the administration block where they opened the door with an iron bar.

They allegedly proceeded to the human resources and accounts office where they stole two laptops and took a safe from the office to the main entrance of the administration block offices where they tried to open it but failed.

The gang forced open the boardroom door and then confronted five other complainants who were sleeping. They threatened to shoot them before stealing their cellphones. During the course of the robbery, Pawandiwa the security guard who was in the toilet, called the owner’s wife and alerted her of the robbery.

The owner and his wife went to the Trauma Centre with their security guards to rescue their workers and as they arrived the gang fled. The complainant gave chase and rammed twice into the back of the accused persons’ car, which plunged into a side-road ditch at corner Borrrowdale and Beach Roads. The complainant then lost control of his vehicle and hit a precast wall. The accused in the rammed car then fled on foot with their firearms while the other getaway car escaped. A report was then made at ZRP Borrowdale.

The total value of items stolen is US$3 465 and nothing was recovered.