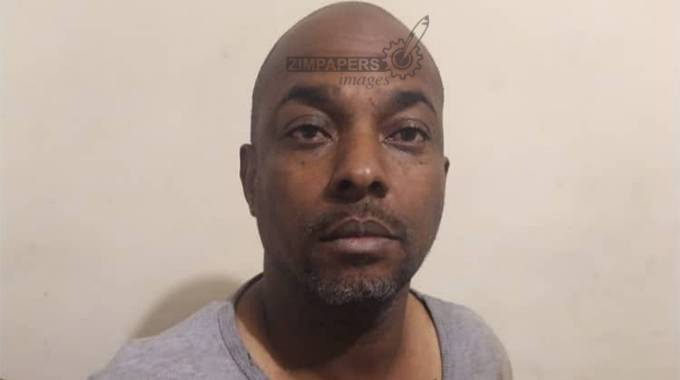 Crime Reporter
The gang of eight most wanted suspected armed robbers, including the notorious Musa Taj Abdul (46) and their police officer host who were arrested in a major raid in Beitbridge on Monday, is expected to appear at the Harare Magistrates Court today facing nine counts of robbery.

Police have since launched a manhunt for four other suspects who fled the raid.

On Wednesday, an application was made to the Harare Magistrates Court for a warrant to hold the armed robbers a little longer for questioning at Harare Central Police Station.

Warrants of arrest for Taj Abdul date back to 1999, with further warrants in 2005 and 2006, and has been sidestepping attempts to handcuff him until Monday.

His accomplices have warrants outstanding from 2018 and 2019.

Police have been chasing Taj Abdul for close to two decades, but his run came to an abrupt end on Monday when he was nabbed together with a fired former Masvingo Central police officer Rudolf Kanhanga alias Tapiwa Munatsi (29), Liberty Mupamhanga (29), Prince Makodza (31), Godfrey Mupamhanga (27), Charles Lundu (47) and Innocent Jairos (32).

It was by yesterday still not clear how the two suspects acquired those IDs.

The CID Homicide has since engaged the Registrar-General’s Office to assist with investigations on the fake IDs.

It is believed that Lundu and Makodza acquired the IDs in order to evade police arrests since they were on the wanted lists.

Yesterday, the armed robbers led police for indications to various places where they committed some of their criminal activities in Harare.

The gang is suspected to have committed most of its robberies in the capital.

A silver Norinco pistol with an obliterated serial number and a magazine with 11 rounds, 19×12 bore gauge live rounds in a webbing belt placed in a black satchel stashed in a washing basket, and a pair of number plates AEX 1577 were recovered from the suspects after their arrest in Beitbridge.

A balaclava was found stashed in their getaway car.

The gang was being sought in connection with a number of armed robberies, including the Mashwede case in Harare recently.

Sources said Taj Abdul, who was once convicted in 1995 for tampering with a motor vehicle, is also wanted for questioning in Botswana and South Africa over robberies in those countries, and Zimbabwean police will soon advise their counterparts.

It is believed the gang owns several properties in South Africa, bought through proceeds of criminal enterprise.

In one of the recent cases, members of the gang are suspected to have been the robbers who raided Trauma Centre in Borrowdale and stole a safe containing an undisclosed amount of cash and cellphones, using two rented cars in the robbery — a silver Toyota Fortuner and a Honda Fit.

Investigations revealed that before raiding the medical facility, the robbers had first raided a house in Queensdale where they got away with cell phones and masks.

The eight armed robbers also robbed two Harare businessmen Mr Tawanda Nyambirai and Mr Rodney Dangarembizi of more than US$220 000 on February 26 at around 7.50am and they had inside knowledge of the business premises.