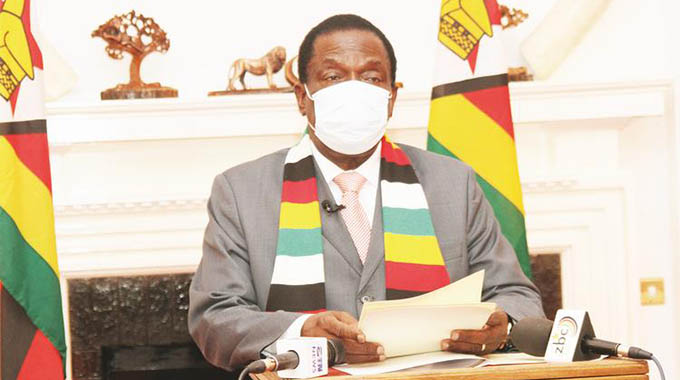 He said this when he officiated at the double burial of national hero Cde Moton Malianga and heroine Dr Ellen Gwaradzimba in Harare yesterday.

The 2020/21 agriculture season is largely expected to yield positively due to the normal to above normal rainfalls so far received in all major national farming regions.

Agriculture, together with mining, are the key pillars with which the Government expects to foster economic development towards upper middle-income economy by 2030 as espoused by the President.

The National Development Strategy 1 (NDS1) is giving more support to mining and farming as these are expected to champion the Government’s development and economic empowerment agenda in the coming decade.

“The rainy season is well underway, with most parts of the country having received above normal rainfall,” said the President.

“I exalt us to continue to work hard and adapt as advised by our agritex officials. Farmers have a duty to ensure that we have a successful agricultural season for food security as well as raw materials for our agro-industries,” he said.

Zimbabwe’s economy is agro-based and most value chains, including for large and Zimbabwe Stock Exchange listed companies rely on the sector.

The President called on all stakeholders including those in the academia to partake in the country’s economic development.

He said this in reference to the late Dr Gwaradzimba, a PHD holder who availed herself to the service of the country’s development ahead of personal interests.

“Her history as an academic and continued service to the nation in the political arena must challenge all academics to avail themselves for strategic national deployments across all sectors of the our economy,” said President Mnangagwa.

“Our national Vision 2030 and the National Development Strategy 1 (NDS1) requires all hands on the wheel across all sectors of the economy and fields of specialisation,” he said.

Twenty years ago, the Government embarked on a highly successful land reform programme that economically empowered hundreds of thousands of farmers who are now proud owners of prime farming land.

The country has scored success in the tobacco and horticulture sectors that saw majority of farmers who ventured into the areas earning the country hundreds of millions of dollars annually in foreign currency.

More strides have been gained in achieving national food security through state funded programmes such as Command Agriculture and the highly successful Pfumvudza concept.