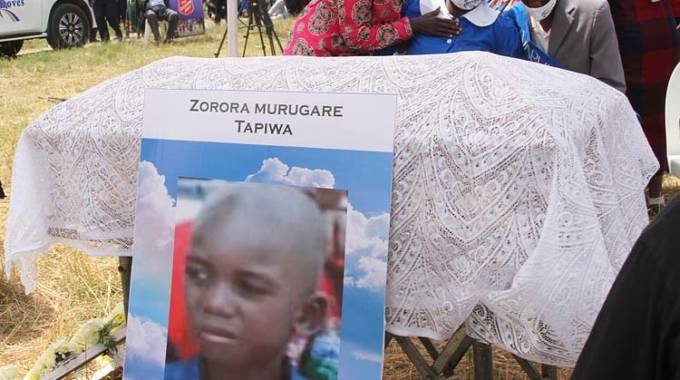 The rains fittingly fell around midday just as the hearse bearing the remains of Tapiwa Makore Jnr rolled into Makore Village, Murehwa, yesterday.

And around mid-afternoon, as the brown wooden coffin eased into the brown soils of the village, it showered again.

Culturally, there is a link between the opening of the heavens and the burying of the dead.

But if the rains were meant to soothe the departed soul of the seven-year-old Tapiwa or offer a comforting mourning atmosphere for the Makore family, clouds of intrigue, uncertainty and delayed justice will linger a little bit longer for the family.

Explaining to The Sunday Mail during Friday night’s vigil why his family had rejected the DNA results which confirmed that a head found three days after the gruesome murder was not their son’s, Munyaradzi Makore, father to the murdered Tapiwa, said the skull had no human flesh, no hair and its teeth did not even match their son’s. Not even a tongue.

Even a pathology test run by Parirenyatwa Group of Hospitals confirmed that the head belonged to a 13 or 14-year-old, not a seven-year-old.

What has raised suspicion is that DNA samples were only extracted from Tapiwa’s mother, and not from both parents. The father confirmed as much, saying the DNA tests were conducted through samples drawn from his wife, and not from him, or both of them.

Ms Tabitha Chikeya, a lawyer who offered legal services pro deo to the family, also confirmed that samples were drawn from the mother only and not from both parents.

“That directive came from the police who were conducting the investigations, that they needed samples only from the mother, and only the police can answer why they decided on that. Maybe it was a financial consideration,” she said.

Pressed on whether the decision could have been premised on that a mother is considered a 100 percent match, she refused to answer, preferring that only the police can answer that.

ZRP spokesperson Assistant Commissioner Paul Nyathi said: “The DNA tests were done  with guidance from experts and since this was not a paternity test, it was only prudent to get samples from the mother.”

On why the family had refused a State-assisted funeral, Mr Makore said the assistance they wanted was justice for Tapiwa Jnr, and not coffin, food and related funeral expenses, as they could contain those.

“It is justice that we want. To us, everyone who has something to do with the murder is with the police and we are just wondering why the wheels of justice seem to be taking this long to turn,” he said.

Tapiwa Jnr was last seen around sunset on Wednesday September 16 last year when he was sent to tend the family garden. A search party that evening yielded nothing only for dogs to drag pieces of what looked like a human body piece into the village compound that Friday.

When police arrived in the village to investigate, a search was ordered into every homestead in the village. A pair of trousers covered in blood was recovered in Tafadzwa Shamba’s room, who was immediately taken in by the police as his explanation to the soiled trousers did not add up.

On interrogation Tafadzwa, a herdboy, implicated his employer, Tapiwa Makore Snr, who is cousin to Munyaradzi Makore. The herdboy readily admitted to the gruesome murder and explained in graphic detail how they had intoxicated the young boy with beer, before cutting him into pieces. Through his indications, limbs were located and dug from a pit latrine.

However, the family contends that the skull that was found on the Sunday after Tapiwa’s murder on Thursday was not only too old to be their son’s but did not have human flesh, blood or hair.

“What is surprising us is that the limbs which were retrieved about two weeks after the murder had intact flesh, save for those parts which had been removed by Tafadzwa, yet the skull which was recovered in less than three days did not have any flesh. Even the pathologists who did a post mortem at Parirenyatwa said the skull was too old to be our son’s,” explained the father.

In November last year the family received DNA results from the torso and limbs, which confirmed that the parts matched. These were done by AIBST. On March 9, they received the second set of DNA results which confirmed that the head matched the torso. The skull DNA tests were done by the National University of Science and Technology (Nust) and AIBST.

It is to this end that the family has resolved to have an independent DNA test for the skull, which was not buried with the other remains yesterday. Mrs Beaulah Musupayi, the family spokesperson, said they were looking at raising the US$4 200 needed for the DNA test so that they can have closure on the issue.

“If our independent tests confirm that the head is, indeed, Tapiwa’s, then we will proceed burying it with the other remains,” she said.

Yesterday’s sombre and highly emotional burial ceremony, which was attended by thousands of mourners, some who walked as much as 10 kilometres to Makore Village, was a culmination of months of mourning.

When news of the murder broke, Chief Mangwende, under which the village falls, initially said it was taboo in his area for a torso to be buried without a head, which dragged the burial rites for some months.

When a concession was finally reached that a burial could proceed all the same, the initial burial ceremony was slated for January 9, only to be postponed as the country entered into the second national lockdown to contain the coronavirus pandemic.