Teachers mull another tools down 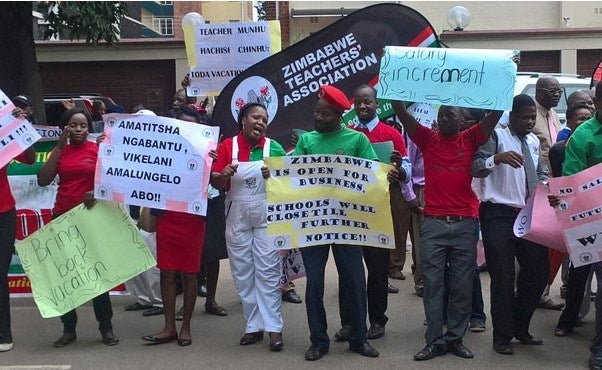 RURAL teachers have threatened to mobilise sister educators’ unions and roll out a second national shutdown to push President Emmerson Mnangagwa’s government to address their grievances.

Teachers and other civil servants are demanding payments in United States dollars or equivalent in Real Time Gross Settlement dollars using the interbank rate, arguing that their salaries have been eroded by inflation.

Amalgamated Rural Teachers’ Union of Zimbabwe gender and social welfare secretary Moreblessing Nyambara yesterday told journalists in Harare that they would sensitise citizens to ensure the shutdown would not be marred by violence.

“In the immediate, our way forward is very clear. We are engaging other unions to call for the second national shutdown. This time around, we are urging all citizens to conduct themselves peacefully and ignore any provocations from State agents,” she said.

In January, when the Zimbabwe Congress of Trade Unions called for a national shutdown, the government responded with force by deploying the military to quell the demonstrations, resulting in at least 17 people being killed, while hundreds others were left nursing gunshot wounds.

Progressive Teachers Union of Zimbabwe secretary-general Raymond Majongwe said: “We have 13 000 teachers to consult. We do not want a shut down, but solutions to the problems facing teachers. Government must address these grievances. We cannot accept that things are tight when others are buying Lamborghinis. Teachers must
survive.”

The post Teachers mull another tools down appeared first on NewsDay Zimbabwe.