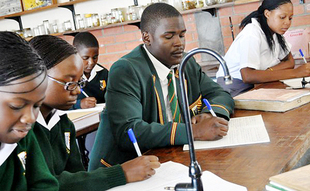 HARARE – Teachers have resolved to stage a protest against the exorbitant prices of school uniforms.

“We intended to march today but the police told us that we cannot proceed because there is another march by war veterans, so we have decided to move the date to a week before opening of schools,” Majongwe said.

“We will be coordinating countrywide cheap school uniform marches …several parents have approached us indicating the prices being charged are unacceptable.

“How can uniforms be charged in US dollars when workers are being paid RTGS salaries?” he asked.

School uniform prices have gone up by as much as 440 percent, beyond the reach of most parents and guardians.

Clothing Manufacturers’ Association chairperson Jeremy Youmans attributed the increase to shortages of foreign currency. He said “the textile sector continues to struggle with no end in sight.”

“The clothing sector has to import 90 percent of fabrics required which are not made in Zimbabwe,” Youmans said, adding the situation could improve if Merlin Clothing in Bulawayo and David Whitehead in Kadoma get up and running.

The two firms used to produce poly cotton fabrics used in the manufacture of uniforms.

“In clothing, we continue to see growth but it is constrained by the restricted access to forex and the complexities of doing business in Zimbabwe,” he said.

School blazers which used to cost around $50 at the beginning of the year now cost between $170 and $270 (bond notes or RTGS), according to a Daily News survey.

Those with access to US dollars are paying between $60 and $90 for the same product.

On the other hand, boys’ uniforms that were priced at $25 previously are now fetching around US$30, with the bond or RTGS price ranging from $70 to $85, also depending on size.

School shoes, the popular Toughies brand manufactured by Bata, is going for $110 (bond notes and RTGS) from $35 at the beginning of the year.

Tied to this development are increases in the price of other learning materials such as stationery.