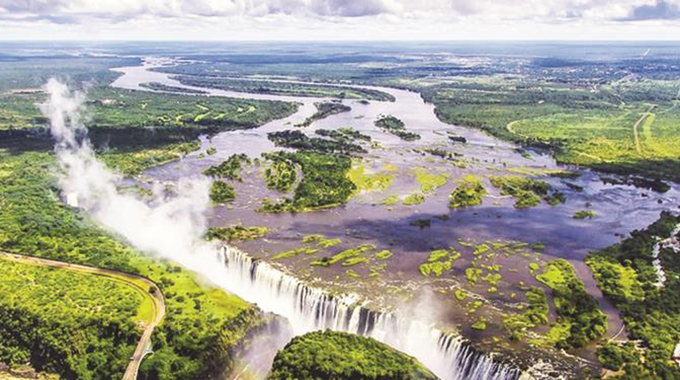 An aerial view on the Victoria Falls

Leonard Ncube in VICTORIA FALLS
VICTORIA Falls is not dry and the seasonal low water levels have not affected tourist arrivals, stakeholders in the industry have said.

The stakeholders, going under the banner “Team Tourism”, earlier held a conference at Robins Camp in the Hwange National Park from Friday until yesterday where they resolved to come up with a crisis communication strategy whose mandate will be to make constant updates on the state of affairs in the industry to counter negative publicity.

For the past week, images and videos of the dry Victoria Falls have been trending on social and international media networks.

“We need to have a crisis communication strategy where among other things, we will have constant updates on the Falls,” read one of the resolutions at the conference.

Team Tourism visited the Falls yesterday, following a story by BBC Hardtalk’s Stephen Suckur last week, who said the effects of severe drought and climate change were impacting on the Victoria Falls.

“The majestic Victoria Falls is the biggest waterfall and remains our biggest drawcard. As you can see, it’s as amazing as ever as the amount of water falling through is actually amazing,” he said.

“One thing people need to know about this natural waterfall is that it is also seasonal like any other river and right now, we have got improving water levels.

“We encourage anyone who would love to see Victoria Falls visit the attraction more than once and in different seasons. For now, there has been no effect on tourism and people have been coming as usual.”

ZTA board member Mr Blessing Munyenyiwa said no known research shows that the Falls will dry up in this lifetime.

“It’s normal to have low water this time of the year but the Falls will never dry in our lifetime. We haven’t had as much water as we have had in the past years but it’s not dry,” he said.

“It’s known that during this time of the year the water level is low. We are happy that it’s been raining upstream and hope in the next few days, things we will be different.

“People should not change their holiday plans especially this year when we anticipate a vibrant carnival and Mapopoma festivals,” said Mr Dube.

A tourist who called himself Mr J. Qooi from Malaysia said: “This is my first time in Zimbabwe and I am excited to see the Victoria Falls. I saw it on the internet and decided to visit.

“I want to come back next time just to be in the Devil’s Pool.”

Mrs Mpho Ollyn from Botswana said she travelled to Victoria Falls after watching a video of the dried up Falls on social media platforms.

“I once came in July when the river was full. Back home there is a video circulating on social media showing that the Falls are dry and I decided to come and see for myself.

“I think it takes one to understand that the river has low and high season. I guess we in Botswana once had a similar situation recently where social media was awash with negative publicity about elephants dying in the national park which was all exaggerated,” she said.