The Elders to visit Zim ahead of polls 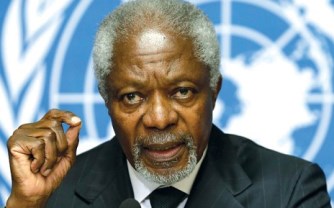 Source: The Elders to visit Zim ahead of polls | Daily News

HARARE – The group of prominent people known as The Elders — who use their collective experience and influence to try and achieve peace and justice around the world — will visit the country this week.

While in the country, they will meet with the leaders of political parties, the Zimbabwe Electoral Commission (Zec) and civil society, ahead of the July 30 poll which has attracted the attention of the international community.

The respected former secretary-general of the United Nations (UN), Kofi Annan — who chairs the group — will head the delegation which is visiting Zimbabwe from July 19 to 21.

He will be joined on the visit by the former president of Ireland, also a former UN High Commissioner for Human Rights, Mary Robinson, as well as Lakhdar Brahimi, the former foreign minister of Algeria.

The Elders said yesterday that their mission was to “meet political leaders and support all actors working for free, fair and transparent elections, an inclusive transition and a brighter future for the country”.

The Elders’ group was founded by the revered late South African president, Nelson Mandela, in 2007.

Zimbabwe holds its eagerly-anticipated national elections on July 30, which will see Mnangagwa facing a presidential field consisting of 22 rivals who include four women — a record in the history of the country.

In November 2008, ousted former president Robert Mugabe — who was hostile to The Elders and international observers — banned former United States president Jimmy Carter, Annan and Machel from visiting Zimbabwe, to assess the impact of a humanitarian crisis which was ravaging the country then.

The Elders’ trio had sought to convince the international community to send relief aid to millions of Zimbabweans who were facing mass starvation.

Their intended visit also coincided with the outbreak of a deadly cholera outbreak which killed more than 4 000 people countrywide.

“We seek no permission other than permission to help the poor and the desperate. However, the refusal of the Zimbabwean government to facilitate our visit in any way has made it impossible for us to travel at this time,” Annan told reporters in Johannesburg after Mugabe’s much-criticised ban.

Mugabe resigned from power on November 21 last year after Parliament had put in motion plans to impeach him, ending his 37 years of iron fisted rule in Zimbabwe.