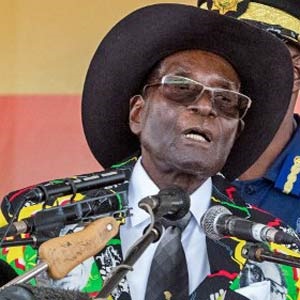 Robert Mugabe undeniably had become a prototype of the ruler which Niccolo Machiavelli framed. At any rate, Machiavelli presence a pragmatic and consequentalist view of politics whereby good or evil were means used to bring about an end.

Although Machiaveli did not believe in the divine right of Kings, he strongly believed in the inherent selfishness of the individual. This was true for R.G Mugabe. His rule was largely characterized by trickery/ deception, disappearances, death, handicapping of people among other atrocious undertakings.

For R. Mugabe, power indeed corrupted absolutism and he would do “anything” that he deemed necessary to maintain his position of power which he safeguarded jealously. His rule was earmarked by bloodshed which even the locals feared to testify as a way of the love of dear life. However, when the international community and individuals spoke about it, he accused them of lamenting some nonsensical devilish talk meant to precipitate regime change. Who cared? He argued that he had the custody of Zimbabwe and the British for instance should do likewise.

Robert Mugabe called for a Land Reform Program which drastically graduated from being amicable to gruesome and lethal. White farmers were at the mercy of Mugabe and some of his ZANU PF cronies but even the police could not enforce the much needed rule of law. Ben Freeth and Campbell were even accused of putting the government to shame since they had referred the case to the SADC Tribunal after they were denied locus standii in Zimbabwe’s courts of law. Human rights were grossly violated just like property rights which meant no sense. This was the ZANU PF led by Mugabe which could do anything to maintain the hot seat.

“Ivhu kuvanhu”, a popular mantra to lure the rural citizens into voting for a wolf into power and when the goats are consumed people wondered why. Just a quick comment, most of the people who acquired the land as a result of the government’s excessive brutality lacked the requisite knowledge, therefore they just celebrated possession or rather ownership and not production. Soon Zimbabwe was plunged into economic doldrums as production was low, unemployment sky rocketed and food shortages becoming rampant.

It does not require Solomonic Wisdom to apprehend that ZANU – PF lost both parly and presidential elections in 2008. Mugabe knew that the hay days were over and would step down if need be. However, the Presidential results could not be released as soon as they were expected. ZANU – PF sympathizers were “cooking” electoral results to suit their needs. After so many weeks of waiting, it was announced that Tsvangirai had the majority but could not reach the required percentage. Therefore a re – run was to be held in which Tsvangirai pulled out and ran Mugabe alone. The amount of violence that was unleashed to citizens by ZANU – PF was unimaginable. Operation “Wakavhotera papi ?”, paraquat was used, long and short sleeves cutting of hands and legs, butchering of people, burning of homesteads, axing of people among other evils were perpetrated by Mugabe against opposition. I would like to believe that Mugabe failed to understand his growing unpopularity and wanted to use force to inspire virtue. Mbeki like an angel of doom sold it out together with other observers that the elections were credible.

Zimbabwe had transcended to be a one party state as a result of Mugabe’s massive centralization of power. He made sure that his position was secure together with that of his close cronies. Freedom of speech was guaranteed but not after speech. Some newspapers were banned and also programmes so that only ZANU PF propaganda would spread like veldfire even to the deaf, to the dump and to the blind. This was a real deviation to the revolutionary principles if only you speak against a party that brought independence. Further, Mugabe made sure that the history of the struggle was mastered and the role of ZANU –PF illuminated like mad. Mugabe was pursuing his own agenda irrespective of the people’s needs.

He attested his landslide victory of the 2013 Presidential elections against opposition which he mocked to be in quagmire compared to ZANU. He ensured that his glorified party manifesto find its way to qualify as a national policy. The deliverables of the policy are questionable to the effect that it warrants a separate article. He booted out members that he perceived as threats to his dominion and authority. The likes of Joyce Teurairopa Mujuru, Emmerson Dambudzo Munangagwa, among others who were unfortunate were accused of plotting the ouster of Mugabe. No wonder it is said that when the hyena wants to eat its young ones it accuses them of smelling like goats. Mugabe was just paving way for his loud speaking Gucci Grace. Zimbabwe was almost on a transition from a presidential democracy to some hogwash family dynasty.

Mugabe was not ashamed neither moved by the fact that he was a nonagenarian and close to a century but could not quench his political thirst for any reason. His wife even trumpeted that he would rule from a wheelchair or from the grave.

Fellow Zimbabweans, this was the Mugabe who made the likes of Dzamara to disappear, made use of the 5th Brigade trained in Korea to kill about 20 000 dissidents in Matabeleland, plunged Zimbabwe into economic doldrums, rejected the right to assembly, rigged elections, turned Zimbabwe into a basket, made a number of people handicapped, burnt people’s houses, violated property rights, isolated Zimbabwe. All these and other atrocities were committed in the name of holding on to power, for to him the end justified the means. He could use any evil as a means to bring about an end that is to secure power.