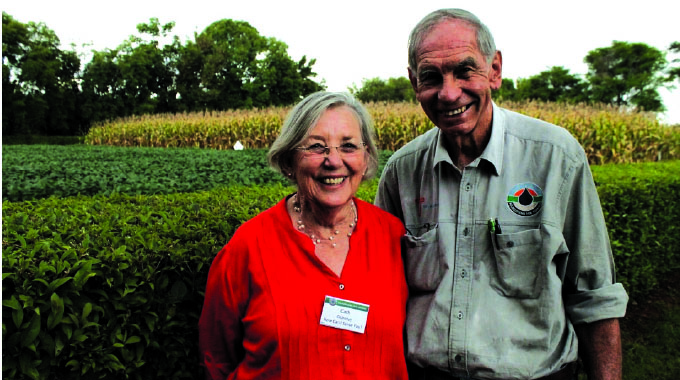 Zimbabweans have embraced the Pfumvudza/Intwasa programme that is turning out to be the trump card for this summer cropping season. However, not many people know the man behind the concept. Last week, The Sunday Mail’s News Editor Kuda Bwititi tracked down Foundations for Farming founder Mr Brian Oldreive, who is one of the pioneers of the Pfumvudza model.

Q: Mr Oldreive, give us a brief profile of yourself?

A: I am the founder of the Foundations for Farming organisation, committed to implementing best farming practices. I was born here in Zimbabwe in 1943. My wife and five children were also born in Zimbabwe. For 20 years, during the 1960s and 1970s, I practised farming in the Karoi and Tengwe areas, mainly venturing in tobacco farming. But in November 1978 I became a born-again Christian. Shortly after that, I had an encounter with God, who convinced me that tobacco was not for me. I was of the view that tobacco was poisoning people, so I stopped farming tobacco to focus on food crops.

Q: When and how did you first conceptualise the Pfumvudza model?

A: When I turned to maize farming, I started to ponder on the best concepts that I could work on. I realised that in those days, most people preferred deep ploughing. But this method was not bringing desired results, as it caused tremendous soil loss and droughts became severe because water was running off. So the yields were poor. That was around 1982.

So I prayed and God revealed to me that deep ploughing is not part of natural creation. The best results would come from God’s natural system. So I decided to copy what God does in natural creation and I observed that the leaves fall down on the ground and the grass dies down and there is a protective blanket over the earth, and that is how God preserves soil to infiltrate the water that we receive. The water holds better in the soil through this method, rather than when we do deep ploughing. So that is why I stopped using deep ploughing.

Q: Did you face challenges to convince people back then, given that deep ploughing was the preferred model?

A: I did! Many people did not believe me and said I was wasting time. But I was not deterred because I was convinced that this model would work. I decided to put the model into practice by starting with just two hectares. I prayed for wisdom and God showed me how to plant maize into wheat straw residue. This is just the same as what God does in nature.

So, on those two hectares, I made sure that I carried out very high standard management. From these two hectares, I was able to get a harvest of 20 tonnes, which was 10 tonnes from each hectare. Back then (in 1982) it was quite a feat to achieve 10 tonnes per hectare, because the average yield was 500kg to one tonne per hectare.

After the first year, I decided to grow 50 hectares the next year, increasing gradually every year, like to 100ha, 200ha and 500ha until we reached 1 000ha. We were carrying out this programme in Matepatepa, Bindura, and because of the success that we were recording, we started to buy land from neighbouring farms to implement our concept. In time, we were able to increase our hectares to 3 500.

Q: Did you extend the programme to other areas outside neighbouring farms?

A: Yes, we did that. God showed me that the people from Chiweshe, who were just across the river from Matepatepa, were hungry because of poor yields. We went to teach them the concept. This is how the programme started to grow and became known in different parts of the country.

However, we still had a challenge because the Government of that time was still advocating deep ploughing. To our advantage though, farmers that had been trained to implement the concept were able to testify about its successes. From 1987, we were able to introduce the concept to Agritex officers. We carried out many field days and agriculture learning institutions also started to adopt the model.

Q: How did the name Pfumvudza come about?

A: The name Pfumvudza was suggested by a friend of mine, Berin Stockhill. On a certain day in about 2007, he saw me with a hoe above my head teaching people that they can be the best farmers in the world with a hoe, and that no modern machinery can achieve the precision as you can with a hoe.

He was impressed. Berin noticed that one family needs one bucket of maize to feed a family for one week. He worked out that 58 x 300 gramme cobs would fill a bucket of maize.

So we calculated the cost and realised that from an area which is just one-sixteenth of a hectare, you need just US$50 for inputs and you can grow enough food for your family for the whole year.

The Pfumvudza programme is about making the most out of a small piece of land. A standard Pfumvudza plot measures 39 metres by 16 metres, which is one sixteenth of a hectare.

From this one sixteenth of a hectare, a farmer can grow enough to feed a standard family for a whole year, because output can be 800kg to one tonne. So I see Pfumvudza as the highest standard of farming in the world. It can be done using hoes and no machine can do it better from that small plot.

Q: How was this concept adopted by the Government?

A: I shared this concept with the late former Minister of Lands, Agriculture and Rural Resettlement Air Chief Marshal (Rtd) Perrance Shiri and he was impressed. The Permanent Secretary, Dr John Basera, then called us into his office. Dr Basera visited some of our farmers who are implementing the concept successfully in Domboshava. The Minister and Dr Basera were so excited that they took it to Cabinet, which gave the go-ahead to implement it as national policy. When he succeeded Minister Shiri, the current Minister, Dr Anxious Masuka, embraced the concept wholeheartedly. This is why the Pfumvudza training programme has targeted two million households for this season. Each family will have two Pfumvudza plots — one to feed the family and another to feed the whole nation.

Q: What is the secret behind the success of Pfumvudza?

A: The secret is not just about making the most out of a small piece of land but the technology and management system. This is very important. If it is not done properly, it will not work. We must acknowledge God because he is the one who can add the miracle of increase.

So, we have a very simple technology and a very simple management system, but these simple foundations can change our nation. It must be understood that Pfumvudza was developed to answer the question: “How much land is required to feed a family?” The model assumes that a family requires a bucket of maize per week to provide their staple diet, sadza.

To fill a bucket with shelled maize you would require 56 cobs weighing 300 grammes each. If each maize plant produced at least one of these, we would require 56 plants. The spacing of planting stations within a row is 60cm and each station would have two plants, thus we would require a row of only 16 metres to produce a bucket of maize.

If we were to produce a bucket for each week of the year, this would mean we would need 52 of these rows. At a row spacing of 75cm, this would mean our block would be 39m long. 16m by 39m is only one-sixteenth of a hectare.

God showed me that when you do something well, joy comes into your heart. The Bible says our joy is our strength, and when the people become joyfully motivated, the work ethic improves greatly. God showed me that you should only grow that which you can manage at a very high standard.

In the Parable of the Talents, it is said that if you are faithful with little, God will add to you, but if you are unfaithful with little, God will take that away from you. At times, people grow more than what they can manage. You can always start small and build, that is why I started with two hectares. Pfumvudza is a pilot model the Lord can multiply at that same very high standard.

Q: Have you sold Pfumvudza to other countries outside Zimbabwe?

A: Pfumvudza is being practised in 40 countries in Africa, after having started in Zimbabwe. We have stations emerging in all five continents of the world.

Q: Do you think Pfumvudza can take back Zimbabwe to its status as the breadbasket of Southern Africa?

A: We have to mobilise all our nation’s land resource for sustainable profitable production and produce a surplus to help other nations feed themselves in this climate change era. The Foundations for Farming principles, out of which Pfumvudza has evolved, apply to all scales of farming. The latest no-till-one-pass mechanical planters are ideally suited to God’s technology in nature. For that matter, the principles apply to any industrial, manufacturing and productive endeavours.

Some prominent lifetime mining experts have come to me asking how to apply the principles to mining, and are making wonderful headway in their endeavours.

A: Finally I have to say that the true foundation of everything in life must be founded on the humility, unselfishness and faithfulness of Christ Jesus. (1 Corinthians 3:11).That is the main miraculous reason why we are influencing other nations in the world, all achieved with very little money and no ambitions and plans of our own. The likeness and character of Jesus in all of us applied in all our lives is the true hope for Zimbabwe and the world. That is why we call ourselves Foundations for Farming.