There is no water crisis in Bulawayo: Consultant

Source: There is no water crisis in Bulawayo: Consultant | Sunday News (local news) 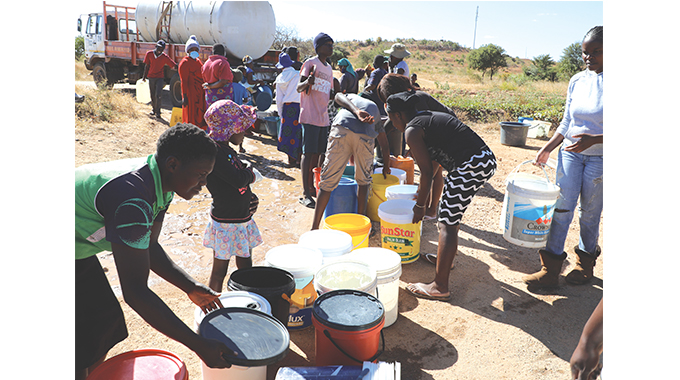 Vusumuzi Dube, Senior Municipal Reporter
THE Bulawayo City Council has been put under the spotlight concerning water problems in the city after a Government-appointed consultant revealed that the city’s supply dams have water that can last between nine to 14 months.

In addition, the consultant said only $12 million was required for short-term funding to address the water situation in the city, and not $77 million that the local authority had proposed. Bulawayo has introduced a six days per week water shedding regime while in some suburbs council has indicated water would only be restored after the next rainy season.

The council argues that the water shedding regime was meant to conserve dwindling water levels at its supply dams. In February, the council had applied to the Government to declare the city’s water crisis an emergency to enable Government and development partners to mobilise resources towards provision of water in the city.

However, Government did not declare the crisis an emergency. The Government through the Ministry of Local and Public Works then engaged an independent engineering consultant to assess the water situation to give a second opinion.

In his report, the independent consultant, Engineer Paul Kruger argued that the city was not facing a “water shortage per see” but the council’s challenge was on water infrastructure and how to bring the water to residents. Further, the report noted that council was actually supplying treated water for irrigation purposes and the amount of money they were requesting from Government and other development partners to solve the water problem was more than what was actually needed.

“Looking at the water currently available, there is Insiza Mayfair and at the current requirements of about 150 megalitres per day (to residents), it will mean that dam itself has 5,1 months of water available. I am not saying I am capable of bringing that water here, but that water body is there. If Inyankuni was to supply the City of Bulawayo by itself at a rate of 150 megalitres per day, that will give us five months of water. From Mtshabezi Dam on the other hand, we could actually have 3,6 months of water. If we put these together, we actually have 14 months of water supply. The bottom line is that water is actually here. The water is in the system. The only challenge is in getting the water to the people,” said Eng Kruger.

He said the other challenge was that part of the Mtshabezi pipeline was not operating at optimum level.

“Just take an aerial picture of the Insiza pipeline for example, you will see clearly organised farming activities occurring along the pipeline meaning the city is supplying these people with treated water for their agriculture purposes, what is needed here is that we come up with a pipeline to supply them with untreated water, so that all the treated water is directed to the residents of Bulawayo where it is most needed. We also need to come up with a system to ensure the Mtshabezi pipeline operates at full capacity, that means installing a pump along the pipeline. In future, we need to understand that Lower and Upper Ncema, Insiza Mayfair, Inyankuni and Mtshabezi is one water body.”

He also said only $12 million was needed to solve the water problems in the city in the short term.

“With $12 million the city can have a constant supply of water in the next three months. Further the local authority cannot be talking about purifying Khami Dam water because that is an expensive process. As per my projections, part of the $12 million will be used for the Epping Forest borehole expansion project ($1,4 million), Mtshabezi pipeline boost ($2,2 million), Insiza pipeline ($1,3 million) and Inyankuni ($325 000), to mention but a few. With this figure we can bring 126 megalitres of water a day into Bulawayo which is enough to cater for the city’s water needs,” said Eng Kruger.

The Government has already allocated $10,6 million for work at Nyamandlovu Rochester where an additional 15 boreholes are being rehabilitated to complement the 20 boreholes that are pumping water into the city.

Contacted for comment, Bulawayo Mayor Councillor Solomon Mguni said while council noted Government’s intervention, the report did not address mechanical strategies suggested to bring water into the city. He revealed that a special council meeting had been convened last Friday where councillors and management reviewed the consultant’s report.

“What emerged from the review meeting is that councillors appreciated the Government’s intervention but as council we insist that the panacea to the city’s water problem is in the north not the south, because when you look at it our dams in the south received just a month’s worth on inflows this year. We need to sort out catchment areas in the north of the city.

“We also have a challenge with the report as it suggests that we empty our dams totally, rework all our mechanics instead of the gradual abstraction which is being implemented. However, as a way forward, we have advised our engineers to sit down with the consultant and Zinwa (Zimbabwe National Water Authority) engineers to come up with a more workable plan because what we want now is an urgent solution,” said Clr Mguni.

Meanwhile, the Bulawayo Progressive Residents Association (BPRA) said it was unfortunate that Eng Kruger’s report was suggesting that there was no water crisis in the city. BPRA co-ordinator, Mr Emmanuel Ndlovu revealed that the situation in the city had deteriorated as some residents were now resorting to the use of sewage water.

“It is not fair to say there is no crisis when residents are waiting through the night for water bowsers as seen in areas such as Cowdray Park and some residents in Pumula are now resorting to using sewage water for household use,” said Mr Ndlovu.

The Government has been worried about how some local authorities came up with budgets needed to address service delivery. Early this year the Government, through the Ministry of Local Government and Public Works sourced four water pumps from South Africa for US$440 000 for the city of Gweru. This was after the local authority had, however, indicated that it needed US$6 million to source the pumps.