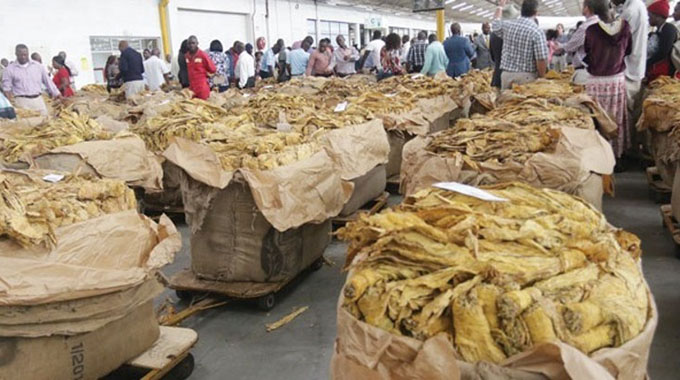 The Tobacco Industry Marketing Board (TIMB), an industry regulator, has allayed fears of price manipulation by merchants during the 2021 marketing season owing to the potential collapse of the auction system.

TIMB chief executive officer Dr Andrew Matibiri told The Sunday Mail Business that the auction system would be maintained this season despite expected low volumes of the free funded crop, as many farmers would likely be de-registered from contract schemes after some of the merchants failed to provide prescribed minimum funding.

The marketing board is currently validating the value of inputs and quantities given to farmers this season to ascertain if contractors complied with required minimum support levels.

While the exercise is yet to be completed, indications are that several tobacco merchants had overstated the value of inputs and the number of farmers supported.

Under the new contract regulations, tobacco contractors are required to provide inputs worth US$1 000 per hectare for smallholder farmers and US$4 000 for large-scale growers.

Zimbabwe, which ranks among the world’s largest producers of the “golden leaf”, has a dual marketing system where the product is sold through both auction and contract.

Over the years, the auction system, which determines minimum grade prices for contract sales, has been declining, with 96 per cent of the crop now sold through contract.

This year, only 4 per cent of farmers self-funded, while the majority were financed by contractors.

This means the very little volume will be sold through the auction system and might be insufficient to determine the minimum grade price of tobacco.

Some industry players are worried about the demise of the auction system could see massive price manipulation in favour of contractors, which would frustrate tobacco farmers from growing this key commodity, a major foreign-currency earner.

The local auction system used to be the marketing model in the world, but “free-funded” tobacco volumes have shrunk as most farmers who benefited under the land reform joined contract schemes as they
lack capacity to borrow due to lack of collateral.

About 2 000 commercial farmers were involved in tobacco production prior to the land reform, producing about 200 million kg, or an average of 200 tonnes per farmer.

But the land reform programme has seen the number of growers increasing to over 100 000.

“Many farmers will be de-contracted and will be free to sell through the auction system,” said Dr Matibiri.

“We hope this will provide reasonable volumes to prop up the auction.

“If this does not happen, we are going to have a mechanism to determine minimum prices to ensure that farmers are protected from any kind of price manipulation.”

Over the past two years, industry players had been engaging Government to make a case for the maintenance of auction sales.

Zimbabwe Tobacco Association chief executive officer Mr Rodney Ambrose said there was a need to restore the viability of the auction system to insulate farmers from all kinds of abuse by the merchants.

“We need to return to a system where farmers self-finance themselves so that the auction system remains viable,” said Mr Ambrose in an interview last week.

“We cannot have a situation where contractors determine the price of inputs, the price of extension services; the prices of the final product. This leaves farmers in debt. Besides, the contract system is not healthy in terms of foreign currency generation.”

Last year, Zimbabwe exported tobacco worth about US$458 million.

Of this amount, US$70 million was paid to farmers, while the Reserve Bank of Zimbabwe retained US$70 million.

The remainder was pocketed by merchants.

There is growing concern that some merchants overstate the value of inputs so that they can deduct more money and bilk unsuspecting farmers.

Zimbabwe Farmers’ Union executive director Mr Paul Zakariya said while it was an advantage that farmers were producing the tobacco without forking out any capital, the “real value” was being enjoyed by the merchants.

“Our focus should now be on value retention and this depends on who is funding production,” said Mr Zakariya.

“We need to make sure that we use local resources to fund the production and maintain the auction system as our price discovery model.

“It is important that our tobacco is sold through a competitive bidding process, otherwise the real value will continue to be siphoned out of the country,” Mr Zakariya added.

He said whereas bank charges interest for loans, the contractors make their money in different ways, including inflating the price of inputs while suppressing the price.