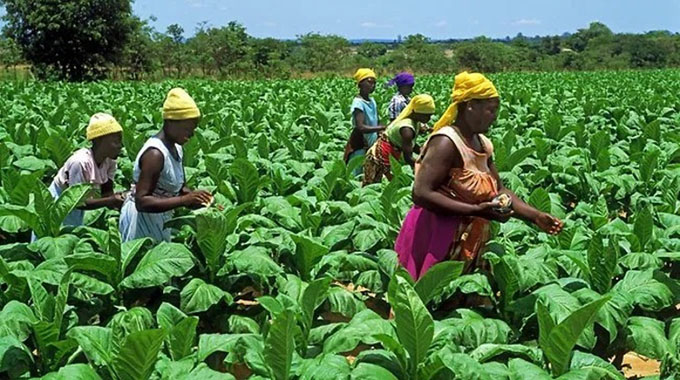 THE “collapse” of the tobacco auction system has ignited debate on whether minimum auction prices should continue to determine the pricing of contract tobacco.

Zimbabwe has a dual marketing system where tobacco is sold through both auction and contract.

Over the years, prices have been determined by the minimum price paid on the auction market.

At the time this policy was put in place, tobacco sold through the auction was almost half the total output.

The auction system used to be the marketing model in the world, but “free-funded” tobacco volumes have sharply declined, as the majority of the farmers have joined contract schemes since they lack capacity to borrow due to lack of collateral.

Last year, the Tobacco Industry and Marketing Board (TIMB), which regulates the sector, registered about 146 000 growers, of which 95 percent were funded by contractors. This means the crop likely to be sold via the auction floors will be very little.

Industry players and analysts said it would be absurd to continue applying the policy as the tobacco farming landscape has completely changed.

TIMB CEO Dr Andrew Matibiri also believes it is “unfair” for a small crop size of “lower quality (to) determine” the minimum grade price of tobacco.

“It is a very valid issue and the board has agreed that something needs to be done,” said Dr Matibiri.

“We can’t just throw away this important tool of price discovery. The competition at the auction is quite important . . .”

Some market watchers say the demise of the auction system could see massive price manipulation in favour of contractors, which would frustrate tobacco farmers from growing this key commodity.

Dr Matibiri, however, said the TIMB would ensure that farmers are protected from rigged prices.

“There would be some sort of minimum guaranteed price for every grade so that farmers can be protected from price manipulation,” he said.

The tobacco selling season is expected to start on April 7, with production likely to be marginally lower than last year.

According to ZTA, extremely wet conditions experienced in January and February affected the crop in some areas.

TIMB and Agritex are finalising their crop assessment and more accurate figures will be used to determine the expected output.

“The higher-than-normal rainfall has resulted in some areas experiencing waterlogging of fields and leaching of some crops,” Mr Ambrose said.

“This year, while hectares are slightly increased, the wet January and February has reduced yields. The crop is thin and light-bodied.”

Meanwhile, tobacco farmers are seeking an upward review on retention of export earnings to 70 percent — which reflects the minimum cost of production in foreign currency — before the marketing season begins.

The Reserve Bank of Zimbabwe raised export earnings which can be retained by tobacco growers from 50 to 60 percent, a threshold which now applies to all exporters.

“We appreciate that for the purpose of retention levels, tobacco growers will now enjoy the same level as other exporters; that is 60 percent in foreign currency payable into growers’ FCAs and 40 percent converted at the prevailing auction rate on the day of sale payable into local currency growers’ account, both amounts payable net of foreign currency denominated loans,” Mr Ambrose said.

Payment modalities, he added, would worsen growers’ viability this season.

“The stagnant growth this season reflects this. Every season growers find themselves with little profit or in debt with their contractor.

“This debt is in US dollars and carried forward to the next season, with more US dollars loans and debt added. Ninety percent of growers are now 100 percent US dollars borrowed from their contractor, implying no new US dollars comes into the country until the loans are repaid.

“So while on paper tobacco sales may earn US$500 million to US$600 million per season, real inflows are about a quarter of this. Roll-out of diversified cropping programmes for tobacco growers remain paramount so that their general livelihoods are protected, as tobacco viability diminishes each season.”