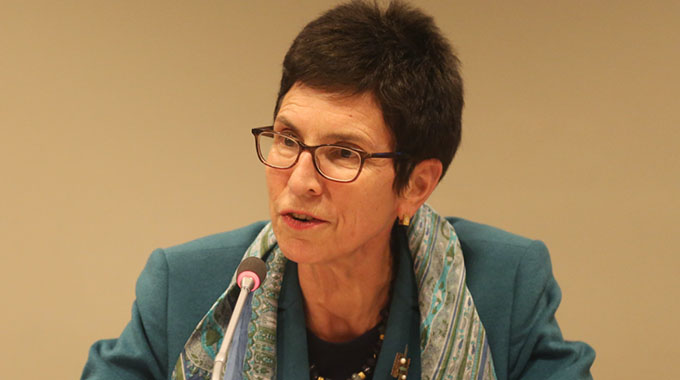 Paidamoyo Chipunza Senior Reporter
United Nations (UN) assistant secretary-general for humanitarian affairs and deputy emergency relief coordinator Ms Ursula Mueller is in Zimbabwe to assess the response to Tropical Cyclone Idai, which made a landfall and claimed hundreds of lives in Manicaland three months ago.

Ms Mueller, who arrived in Southern Africa on June 5 on a seven-day assessment visit of the response to effects of Cyclone Idai in Zimbabwe, Mozambique and Malawi, will also assess other humanitarian challenges affecting all the countries hit by the weather phenomenon.

UN communications specialist Mr Sirak Gebrehiwot yesterday said in Zimbabwe, Ms Mueller who will be in the country from 8-10 June 2019, will also assess response to drought.

“She is expected to visit Chimanimani where she will have focus group discussions with selected victims of Cyclone Idai.

“She will also tour damaged residential sites and witness some of the response activities by UN agencies in selected areas,” said Mr Gebrehiwot.

After the Zimbabwe tour, Ms Mueller will proceed to Malawi.

According to the UN, about three million people were affected by Idai across the three countries.

Prior to her current role as assistant secretary-general, Ms Mueller spent over 30 years working in international affairs, global issues and development financing.

In April, the UN and humanitarian community launched an appeal requesting for US$60 million to provide support to 270 000 people affected by Cyclone Idai. The response as at May 27, stood at 45 percent, thus amounting to US$27 million.

In addition to the effects of Cyclone Idai, the country is also grappling with severe drought that has affected an estimated 5,3 million people. Again, the UN and humanitarian partners appealed for US$234 million targeting to assist at least 2,2 million food insecure communities, bringing the total humanitarian need for Zimbabwe to US$294 million, targeting a total population in need of assistance to 2,47 million for both Cyclone Idai and drought.