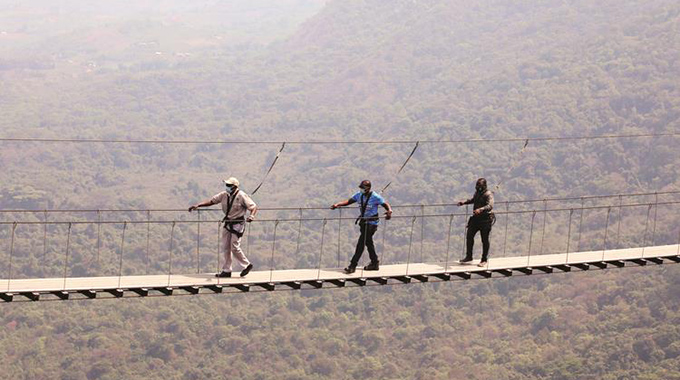 Zimbabwe yesterday held belated World Tourism Day celebrations, amid calls for all to increase the promotion of domestic tourism as the sector starts climbing out of its six-month hiatus caused by Covid-19-induced lockdown.

Tourism largely relies on people travelling to natural and other attractions, both locally and internationally. The lockdown prevented intercity and international passenger traffic and closed restaurants and other places of entertainment, where people gather.

This year’s commemorations fell due on Sunday, but Zimbabwe celebrated  a day later in Chinhoyi, under the theme, “Tourism and Rural Development”.

“I also challenge the Zimbabwe Tourism Authority to coordinate industry marketing efforts designed to extensively promote domestic tourism and also to influence travel patterns by the regional and international travellers,” he said.

“While the current focus in our sector is on recovery, I am also pleased to advise that within the context of the tourism revival and growth strategy, Government has begun to work on the identified nodes that will drive the growth of the tourism sector.

Minister Ndlovu handed over the Kore Kore Cultural Village, which was funded by the ZTA, to the community.

The development was in line with this year’s theme, which underlines the unique role that tourism plays in preserving cultural and natural heritages and providing livelihoods.

Minister of State for Mashonaland West Provincial Affairs and Devolution Mary Mliswa-Chikoka said there was need to improve and promote Kariba Airport, which was key to bringing tourists into the province since travel by road took too long.

“We have no doubt that this event is critical to champion the fact that we are ready as a province to restart the tourism sector in line with phased reopening of the sector initiated by Government,” she said.

The improvement of the Kariba Airport as a key enabler in the sector was corroborated by Tourism Business Council of Zimbabwe president Ms Winnie Muchanyuka.

In her presentation, Ms Muchanyuka said the private sector should join Government in improving infrastructure development.

She implored academics to move to the implementation of their researches and not restrict them to theory.

Allied Timbers and the Forestry Commission chipped in for the initial stages of the project to be a success, while the ZTA drilled a borehole and installed two 5 000-litre tanks.