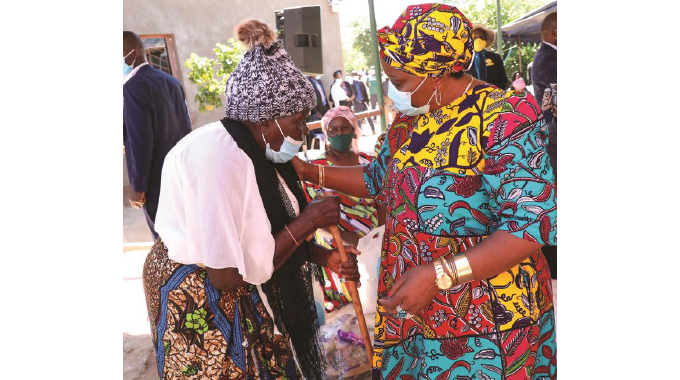 First Lady Auxillia Mnangagwa talks to elderly women who were teaching girls, while handing over groceries to them after the Nhanga/gota/ixiba session at Chief Nekatambe homestead’s in Dete yesterday. — Pictures: John Manzongo.

FIRST LADY Auxillia Mnangagwa’s Gota/Nhanga/Ixiba programme is a timely intervention to equip boys and girls with the necessary information to stay healthy, be morally upright and grow into responsible citizens, traditional leaders in Matabeleland North province have said.

Speaking on the sidelines of the programme held at his homestead yesterday, Chief Charles Nekatambe of Mulonga, said the programme was critical in moulding boys and girls into responsible citizens.

In the dare for boys was Minister of State for Matabeleland North Provincial Affairs and Devolution Richard Moyo, Chiefs and elderly men from the community.

Chief Nekatambe spoke strongly against womanising which he said had contributed to the collapse of many marriages.

“When you get married, stop womanising and be content with your wife. This dare was built for you to come and learn what is expected of a man. Today I woke up with you to milk cows but some of you did not even know how to do it something that every man should know. A man should be able to perform many tasks at the home,” he said.

Another chief said mazondo soup was necessary for boys to grow up strong.

“In our days, there were some days when we would go to the chief’s court to eat mazondo and other natural herbs,” he said.

16-year-old boy Cedrick Nyoni asked whether or not the consumption of herbs to enhance masculinity did not fly foul of Christian values to which he was told the charms were not harmful and that even Christians were married and needed strong backs.

Elders who were present said boys should know how to conduct themselves and understand the rites of passage from boyhood to manhood.

In the nhanga, the First Lady was assisted by the Chief’s wives and elderly women that included gogo Marita Nekatambe, mother to Chief Nekatambe.

In her teachings to the girls during the session, the First Lady said: “I have come so that we teach you what is expected of the girl child. Are you aware that you are important? We are looking at the respect that you accord elders, your dressing and the way you walk. All of us with your grandmothers here, we have come to talk to you and mould a girl child we want as parents, a morally upright daughter. We hope as you leave this place you would have learnt a lot that would help you in future.

“Feel free to ask all you want to know because this will help you in future. As a daughter, how far are you with your manners and education? We did not say after learning from us you rush to get married, we want you to preserve your body and treasure your education. If you combine education with good morals, you will have a bright future. As mothers we will be very proud because we would have managed to groom a morally upright daughter. We say no to those who rush into sexual relationships with boys.”

The First Lady’s words were reinforced by Gogo Marita Nekatambe who spelt out the need to train girls from a tender age.

“We want you to learn to fear men when the time is not ripe. You must view men as lions and run away until you have matured. When I was married I was a virgin as we respected the counsel of our elders. When you enter into marriage you should be dignified and submit to your husband, respect him, prepare food for him and iron his clothes. When giving him food you should show respect,” she said.

Gogo Maria Nkomazana weighed in saying it was essential for girls to observe chastity and not to rush into multiple sexual relationships.

“Do not behave like a wild fruit tree which is frequented by everyone. Respect your body. If a man fondles you inappropriately, report to the elders with immediate effect. Learn to dress properly and putting on dignified clothes. A boy who impregnates you might deny paternity if he sees you dealing with many boys like a wild fruit tree,” she said emphatically.

The wife to Chief Nekatambe underscored the need for children to be respectful at all times and when they get married.

“While we were growing up, we were advised to respect our in-laws. You should be a respectful daughter-in-law who shows that she came from a good family. Children of nowadays do not want to be taught by elderly women and instead accuse them of practising witchcraft. You will never see them sitting down with the elderly,” she said.

Among the Chiefs wives was Mrs Regina Shana who said; “We were taught that if you play with boys and proceed to prepare food for the family you affect your mother’s backbone or legs. I think diseases that are affecting most parents today are caused by their children’s mischief.

“It is joyous if you grow up morally upright and get married in a respectable way. Nowadays girls have lost morals. Even in buses you see a child seated while the elderly woman is standing. That was not allowed during our time. We want children with respect,” she said.

In her remarks, the First Lady said both boys and girls who went through yesterday’s teachings were now ambassadors of the programme and had to share what they had learnt with their peers in schools and communities.

She gave the children her personal mobile number so that they would communicate with her on what they would have done in spreading the teachings for the benefit of all the youths. First Lady Auxillia Mnangagwa talks to one of the boys during the Nhanga/gota/ixiba session after handing over a school bag with books and other goodies to him at Chief Nekatambe’s homestead.

The ambassadors would then invite her for her to see the progress they would have made.

“With what I saw while we were teaching the girls, I saw that here you still preserve our culture. Our girls are still observing ubuntu. They performed household chores with so much ease, a sign that they are being taught and I was happy with what they did,” she said.

She bemoaned that most children of today were being swayed from their culture by Western influences.

“Children these days have been influenced by western cultures and discard our values, which is why I came to chiefs and their spouses so that we counsel our children. We have been ignoring our culture for a long time, but now we are saying, it’s time we revive our norms and values of old. Nhanga/gota/Ixiba has always been there but it was cast aside. Our morals begin in the home. In the olden days it was taboo to see a girl drinking beer, puffing a cigarette. A girl would not be away from home in the dark and never put on skimp clothes.

“To you girls do not be sales managers of your body. As mothers it does not bode well for us,” she said.

The First Lady implored the boys and girls not to take what they had learnt as a joke and to follow the teachings.

For their practical lessons the girls prepared millet sadza, dried vegetables, road runner and stewed fish which they prepared the way it’s prepared in their culture.

The fish was prepared atop millet stalks so that it does not stick to the base of the pot. They also cleaned and cooked offals and pounded millet.

Chiefs, their wives and elderly women and men who conducted the lessons were given food hampers by the First Lady while the children who were drawn from all the districts were given school bags, stationery and food hampers. Chief Jonah Shana, chairperson of the Provincial Assembly of Chiefs from Matabeleland North said from what they were teaching the boys they saw that there were many missing links.

“From what we were teaching children in the dare, we noticed that they did not know how we grew up. We want to thank Amai for spearheading this programme and also taking us back to our traditional foods. We are going to work with our village heads and go to schools and ask to train the children, that way we will catch them young. As Mat North we have welcomed programme this programme with open hands and we promise to carry it forward,” he said.

Minister Moyo praised the First Lady for her educative programme which he said is of benefit to the nation.

“By holding these teaching sessions throughout the country’s 10 provinces you are leading by example, you want to encourage parents and guardians to take time to communicate with their children and enlighten them about their culture. This is important if we are to safeguard our traditional values and breed a young generation that is patriotic and proud to be Zimbabwean.

“I believe that if our children are rooted in Ubuntu, they will desist from indulging in most of the illicit social vices that we are now witnessing in our society,” he said.

Most children, Minister Moyo said, no longer respected their elders, were involved with drugs and engaged in sexual relations at an early age.

“The Second Republic under the leadership of President Emmerson Mnangagwa wants to raise well-rounded young people who will become entrepreneurs and spearhead the development of our economy. This has resulted in the adoption of Education 5.0 in our institutions of Higher Learning. Education 5.0 is designed to nurture a job creator mind-set, and this type of mind-set will only thrive if our youths are disciplined and respect their cultures.”

The First Lady aims to ensure the country’s youths return to the days of old when they were imparted with wisdom by elders to grow into responsible citizens.

This comes as youths are now being affected by western influences resulting in a surge in immorality, promiscuity and a lot of other reprehensible behaviour.