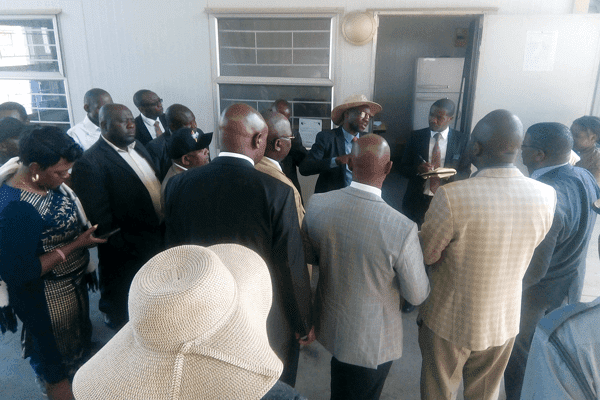 THE Parliamentary Portfolio Committee on Budget, Finance and Economic Development wants travellers and shoppers to be treated with dignity and not be subjected to numerous searches at the country’s ports of entry.

“We believe this takes away the dignity of our people and these officials could synchronise their operations so that travellers are searched only once. That will be adequate. We must think of making it easy for people to do their business,” chairperson of the committee, Felix Mhona, said this week.

He made the remarks at the end of his committee’s tour of Beitbridge Border Post to gather information on operations at Zimbabwe’s entry points for budgetary recommendations to Parliament.

Travellers through Beitbridge have often complained of dehumanising, cumbersome and duplicated searches which many believe were meant to fleece importers.

The committee was briefed on the ongoing expansion of the border post, expected to improve traffic movement and increase efficiency.

“We expect, like at Chirundu, a speedy implementation of the one-stop border model at Beitbridge Border Post to ease perennial operational challenges at the country’s busiest port of entry,” he said.

One-stop border concepts offer a single clearance process for travellers and goods at the departure and entry points as opposed to duplication of processes as is the current status quo.

Immigration regional manager at Beitbridge Nqobile Ncube briefed the parliamentarians on the ongoing expansion work expected to speed up service by separating traffic.

Mhona said it was important for Zimbabwe to align border operations with government’s mantra of “ease of doing business”.

“If we are to compare operations at Beitbridge and Chirundu port of entry, where there is a one-stop border post concept, you will find that if we don’t act with speed in rolling out a similar concept, we won’t be able to address some of the challenges at Beitbridge,” he said.

Mhona said the committee had noted that a number of illegal activities alleged to be happening at the border post, do not usually happen within the port of entry, but along the rivers.

“Here, at Beitbridge, we have seen that this happens mainly along the Limpopo River. We have also seen that it is important for the Zimbabwe Revenue Authority to be capacitated with the requisite equipment like drones so that they can man the border lines, where a lot of illegal activities are happening,” he said.

Smuggling is rife at the country’s borders and some senior government officials, including Cabinet ministers, have been said to be at the centre of some of the cartels.

“But if we expedite our processes in terms of infrastructure development, as enshrined in the Transitional Stabilisation Programme, it will yield a lot of impetus on how we can revive the economy of Zimbabwe,” Mhona said.