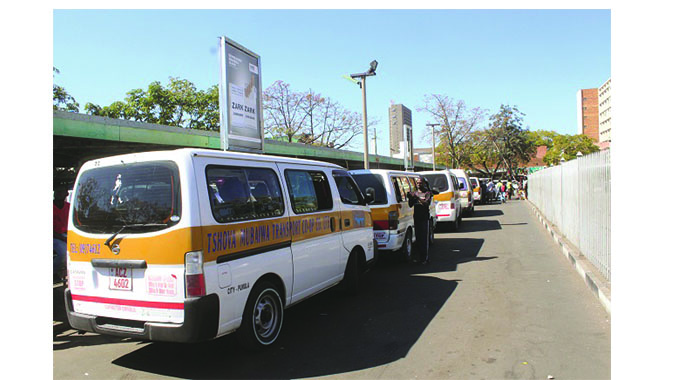 Melinda Ncube, Sunday News Reporter
COMMUTER omnibus operators, who have been engaging in a cat and mouse game with the police in Bulawayo in recent weeks have been urged to join the Zimbabwe United Passenger Company (Zupco) franchise in order to bring sanity to the transport sector.

According to Covid-19 lockdown regulations, only commuter omnibuses affiliated to Zupco are permitted to operate in urban areas. However, recently the number of commuter omnibuses not registered with Zupco and pirate taxis have been on the increase and some of them are causing chaos in the Central Business District as they engage in cat and mouse games with the police. The situation has resulted in the kombis blocking roads and, in some cases, increasing risks of accidents.

“I have continuously encouraged our members to register their vehicles under Zupco so that they can provide for their families as well as their personal responsibilities,” he said.

Mr Moyo said those who were operating illegally were exposing their passengers to risks of contracting Covid-19 and possible accidents while avoiding police. Meanwhile, some kombi conductors said they were against having their bosses joining Zupco because they will lose employment. Zupco employs its own conductors and requires them to have a minimum of five Ordinary Level subjects which most of the conductors said they do not have.

However, Zupco has said they cannot move away from their primary requirements saying it was a way of bringing sanity and professionalism to the sector.

“Our thrust is just to ensure we have professional conductors who are adequately trained in public relations. As for drivers, those for private kombisare employed by contractors so they have a separate arrangement. Zupco only employs drivers for its own buses,” said Zupco marketing and public relations officer, Ms Sikhanyisiwe Ncube.