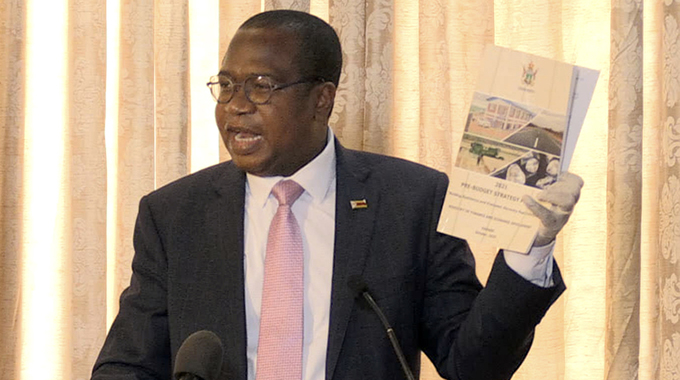 BOLD and decisive steps rolled out by the new administration under the Transitional Stabilisation Programme(TSP) have enabled Government to eliminate the twin national budget and the current account deficits, demonstrating part of the successes of the short-term reform programme, Finance and Economic Development Minister Professor Mthuli Ncube said on Friday.

Minister Ncube said Treasury had ticked all the boxes of targeted reforms under the TSP (2018-2020), laying a solid foundation for sustained growth of at least 5 percent annually until 2030.

Vision 2030, which encapsulates the ongoing economic programmes, is envisaged on growing Zimbabwe into an upper middle-income economy with per capita income averaging US$4 000.

Treasury expects the economy to expand 7,4 percent next year from a projected 4,5 percent Covid-19-induced decline this year on the back of a better agricultural season and a recovery in the global economy.

Projected to decline 4,4 percent this year due to the fallout from the coronavirus, the global economy is expected to weigh heavily on developed economies that are forecast to slump 5,8. Overall, it would recover 3,2 percent in 2021.

“We have eliminated the twin deficit. The budget deficit as well as current account deficit are gone. This year, we are targeting record levels of US$1,2 billion in terms of the current account surplus,” he said.

The pre-budget paper, which is themed “Building Resilience and Recovery Post Covid-19”, is expected to guide the 2021 Budget.

It marks the transition from the TSP to the first long-term National Development Strategy (2021-2025).

Government last year managed to record a current account surplus for the first time in decades.

Further, the current account benefited immensely from the improved competitiveness that came with the introduction of the domestic currency last year.

The fiscal balance, sometimes also referred to as Government budget balance, is calculated as the difference between a government’s revenues (taxes and proceeds from asset sales) and its expenditures. It is often expressed as a ratio of Gross Domestic Product (GDP) has been reduced to below 3 percent of Gross Domestic Product (GDP) in line with the target set by SADC.

Fiscal deficit as a percentage of Gross Domestic Product declined from minus10,5 percent in 2017 to a surplus in 2019.

Consequently, inflation is projected to slow down significantly, with the average annual rate projected at 134 percent by year-end as a result of the highly successful foreign currency auction system.

Minister Ncube said remittances were up 33 percent this year.

Overall, the envisaged growth going forward is largely anchored on the solid foundation laid by the TSP, which runs its full course in December.

Treasury is confident that its growth targets are achievable.

“Surely, we can achieve growth rate average of 5 percent per annum. There is no reason why we should fail to do that — it is doable. Other countries are doing it or even better, that should make sure we get to minimum US$4 000 per capita,” Prof Ncube said.

Key pillars of the anticipated growth include inclusive or shared growth and macro-economic stability, development and support of productive value chains (agriculture and manufacturing), optimising the value of natural resources and investing in key infrastructure and ICTs.

Similarly, focus will fall on building a digital economy, investing in human capital (its well-being and healthcare), building effective institutions, promoting governance and peace, as well as pursuing the global re-engagement agenda.

Picking on some of the key pillars of planned growth, Minister Ncube said this should be inclusive as no one should be left behind.

Efforts will be made to link the manufacturing sector with other key areas of the economy to domesticate the value chains and also limit imports. Measures are in place to mechanise and climate-proof agriculture to build resilience to unexpected shocks such as drought.

Interventions will be made in key sectors such as tourism, which is a low-hanging fruit for growth and job creation, as well as support to create monitoring and administration capacity.

Fiscal incentives will be availed for growth and investment.