Tsvangirai: outfoxed by Mugabe yet again 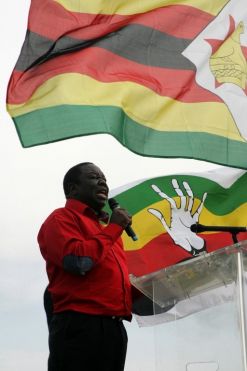 Many believe it was his last shot at dethroning the shrewd Zimbabwean strongman, whose emphatic election victory on Saturday marks the third time he has trumped Tsvangirai in an election.

This time Tsvangirai won only 34 percent to Mugabe’s 61 percent, a result he fiercely contests, alleging his rival rigged the vote.

Tsvangirai has spent the past 14 years building up his Movement for Democratic Change party to make it the only credible alternative to Mugabe’s ZANU-PF.

But some analysts said the election was do-or-die, and that the bricklayer’s son — who grew up the eldest of nine children — may not bounce back from another defeat.

Even Tsvangirai’s closest supporters may believe Mugabe has outplayed him one too many times.

It has been a long journey for the 61-year-old.

Born to a large family in grinding poverty in the eastern district of Buhera, he had to quit school early and earn a living so as to enable his younger siblings to get an education.

After working for 10 years at Bindura Nickel Mine, he became leader of the country’s largest union, spearheading national strikes in the 1990s against Mugabe’s economic policies.

Under Mugabe’s rule, he was detained twice for his political activism and was twice cleared of treason charges.

Yet unlike most of Zimbabwe’s politicians of his age and older, Tsvangirai did not take part in the Chimurenga liberation war against white colonial rule.

He was 28 when Zimbabwe won independence from Britain in 1980.

Despite a strong following among urbanites and Zimbabweans in the rural west of the country, Tsvangirai also lost the race for the presidency in 2002 and 2008, despite running Mugabe close.

Five years ago he won 47.9 percent of the vote to Mugabe’s 43.2 percent, which necessitated a runoff.

In a fair race, he may well have won outright. But a spate of violence against his allies forced Tsvangirai to bow out before the final round of voting.

For his troubles, he has been arrested repeatedly, been charged with treason and faced four suspected assassination attempts.

In 1997 assailants tried to throw him out of his office window.

His bodyguard has been killed and his wife died in a suspicious car crash that left him hospitalised.

But even among supporters, there is a lingering sense that Tsvangirai has repeatedly been outplayed by Mugabe, even when the international community forced the veteran leader to accept him as prime minister.

After more than four years of a forced unity government, Zimbabwe’s most meaningful levers of power — from the security services to the judiciary — remain under Mugabe’s control.

Tsvangirai has been criticised for offering Mugabe legitimacy by participating in polls that have repeatedly been rigged — and for failing to mobilise mass protests that could shift the terrain in his favour.

And on his watch, the MDC has split into two rival factions, draining energy and valuable votes.

Despite this, he has managed to forge an alliance with Simba Makoni, a former finance minister and senior official of Mugabe’s party, who came third in the first round of the 2008 elections.

While he is widely seen as a champion of democracy, recent scandals surrounding his love life, including a public divorce, have put a dent in his popularity.

He “gets distracted by a whole lot of things, including personal issues,” said South African analyst Moeletsi Mbeki, who has known Tsvangirai since the 1980s.

That does little to help strengthen his fight especially facing a “very powerful adversary” like Mugabe.

“Morgan has been learning on the job while fighting against… Mugabe (who) is the one of the cleverest politicians in Africa.”

Mbeki thinks that “in fact Morgan has done reasonably well given the lack of experience he started off with.”

In March 2007, he was among dozens of opposition activists assaulted by police as they tried to stage an anti-government rally, and suffered head injuries.

Just three weeks after taking office as the premier, his first wife Susan died in a car crash that also left him hospitalised.

There are increasing signs his long struggle has taken its toll.

“I don’t have the ‘I-will-not-go’ attitude. When my days are done, I will go and leave these young ones (to it),” Tsvangirai told thousands of supporters before the election.

via Tsvangirai: outfoxed by Mugabe yet again | Fox News.